From The Socialist newspaper, 14 October 2009 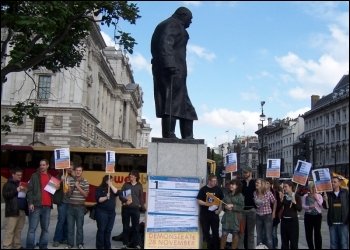 Attempts to divide the working class were ratcheted up a notch at the Conservative Party conference in Brighton last week. David Cameron spoke of the Tories' "big, bold, radical scheme to get millions of people back to work" as "the centrepiece of the Tory conference".

These headline announcements were designed to catch the ear of those youth and workers worrying for their jobs or in desperate search of work as unemployment continues its steep climb. For young people Cameron and Osborne are promising that a Conservative government would create an additional 100,000 apprenticeships, an extra 50,000 training places at colleges, and 50,000 work pairing places.

The Tories presided over mass youth unemployment in the 1980s, which was deliberately brought about by their brutal pro-big business economic policies. The hypocrisy on display last week as Cameron tried to re-brand the Tories as the 'party of jobs' was nauseating. Youth Fight for Jobs would welcome any genuine policies that would help young people in this recession - but not at any price! 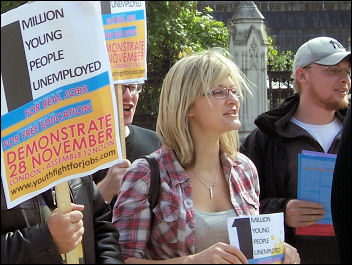 Youth Fight for Jobs campaigning outside parlilament, photo by youthfightforjobs.com

campaigns such as Youth Fight for Jobs and The Socialist have been calling for 'bold' schemes to tackle the developing mass youth unemployment for many months. However we have already resisted and criticised one potentially divisive policy from the New Labour government - the Future Jobs Fund which could see unemployed youth on 'work placements' undercutting existing workers (covered in previous issues of The Socialist).

However the Tories take attempts to divide us to dizzying new heights! Any future funding for the expansion of apprenticeships and college places for young people is posed point blank as dependent on cutting the benefits of 500,000 individuals on incapacity benefit. To try and play the young off against the sick and disabled is an absolutely disgusting move that must be fought.

The big-business politicians want to drive these wedges between us to make it easier to make us pay for the economic crisis created by them and the city bankers.

None of the mainstream parties speak for young people, so young people need to organise themselves to make their voices heard. We need to build strong links with workers and all groups being attacked as a consequence of this recession.

We urge all those who want to resist the Tories' divisive agenda to join the Youth Fight for Jobs demonstration on Saturday 28 November. We will fight for real jobs and for real education for all - not just for some at the expense of others!