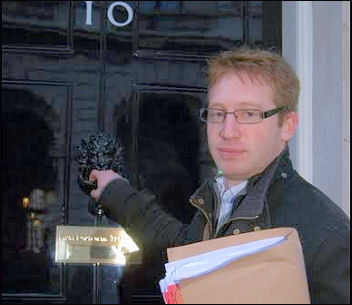 Want a job? Fine, but don't expect to be paid! That's the message from employers who put profits before young people's basic rights. Companies, such as the chain '99p Stores' which takes around £300 million a year, are asking people to take no pay during 'trial' periods.

This is clearly an attempt to treat young people as slaves and rebuild profits by super-exploiting workers. What is worse is that this is often done through Jobcentres or government schemes such as Work Trials or the National Internship Scheme for graduates - in other words slave labour is perfectly legal and legitimate.

This gives the lie to the idea that young people are lazy and do not want to work. Instead there are those so desperate that they will work for free for long stretches in the hope of a permanent job. The effects of long-term unemployment are enough to make clear why, with many jobseekers reporting depression and unhappiness. What kind of a society is it that condemns millions to this rather than making use of their abilities and talents?

The desire to work is clear. However, Labour and Tory policy scapegoats the unemployed. Millions of pounds are spent on forcing people on benefits to look for jobs, on under-resourced training courses, on checking up on their progress and on stopping benefits when criteria aren't met, plunging people's lives into chaos.

The fundamental flaw with this is that the jobs aren't there! The latest government figures are 432,000 vacancies for the 2.49 million unemployed people. Wouldn't it be better to put money into creating jobs, to make use of people's willingness to work?

Instead the politicians' attitude is 'damned if you do, damned if you don't'. Young people are asked to work for free or to take temporary jobs like those included in the Future Jobs Fund, essentially providing the means to restore profits or shore up cash-strapped services.

Meanwhile bankers get paid a fortune. £60 billion has been allocated to their bonus pools for 2009's work 'performance' - a year in which the banks had to write off billions in bad debts and call again and again for bailouts from the public purse.

The Mirror reported on a young woman with a qualification in childcare. After six months of unpaid work at retailer Dorothy Perkins she got a job at 99p Stores, but only after two weeks of working 14-hour days there for free. Most parents would prefer to see money spent on investing in decent, publicly run childcare facilities, rather than continually propping up the fat cats' bonuses.

This system is fundamentally flawed. Youth Fight for Jobs demands that instead of bailing out the bosses with free labour, the government should be investing in providing decent jobs and training and free education so young people can develop their skills and talents and contribute to society. Get active in YFJ and fight back!