From The Socialist newspaper, 3 March 2010

Civil servants on strike on 8 and 9 March 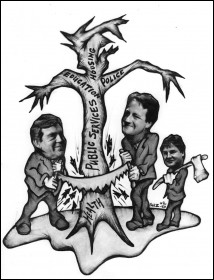 The government is going ahead with its plans to rip up the civil service compensation scheme (redundancy protection pay for civil servants). But members of the PCS civil servants' union have voted for strike action to oppose the changes.

The government's plans would mean many staff losing tens of thousands of pounds if they are made redundant. The government is looking to 'save' £500 million by doing this, but only on the basis of cutting tens of thousands of civil service jobs. Imagine the devastating effect that job cuts on this scale will have on vulnerable people in our society who rely on these services.

64% of members who voted chose to strike, and 81% voted for a ban on overtime. This was despite a massive anti-strike propaganda campaign by senior managers. The millionaire-owned media often tries to portray civil servants as under-worked, over-paid, and having cushy jobs with massive pensions. If you have been into an over-crowded Jobcentre in the last couple of years, you'll know there is no truth in this.

Many people working on the frontline only get paid about £15,000 a year. While this is more than the miserly minimum wage, it is less than the amount that New Labour MP Elliott Morley claimed for a mortgage that didn't exist! And it is about the same as Fred Goodwin (failed ex-boss of Royal Bank of Scotland) is rewarded each week by the taxpayer for his part in destroying the economy!

Frontline civil servants provide a much more important service to society than fat-cat bankers. But compare Fred 'the Shred's' pension with that of an average civil servant who gets a pension of no more than £10,000 a year and very often a lot less.

If the government is successful in its plans to cut the redundancy scheme, it will mean that our public services are more likely to be privatised. Private companies want to make as much money as possible, and they will try to do this by getting rid of staff and reducing services. This will be easier if redundancy protection is cut.

The trade union movement has an old saying - an injury to one is an injury to all. Workers from across the public and private sectors, as well as unemployed people, pensioners and students need to unite together to oppose the cuts agenda.

The alternative is a 'race to the bottom' in services and working conditions, leaving only under-staffed and over-crowded offices or call centres, and insecure, temporary, low-paid jobs with minimal or no sick, holiday and pension rights. We cannot let this happen.

Come to government offices on the strike days and give your support to workers on picket lines taking action.

PCS: All Out to Defend Jobs and Services

Cut the working hours, not the jobs!

The fairytale world of RBS

Where is the BA cabin crew dispute going?

Leeds lecturers win concessions - but cuts remain to be fought

Women will be at the fore in the fightback!

Savage cuts planned at the Beeb

Supporters should own Pompey, not developers

The worldwide thievery of big business