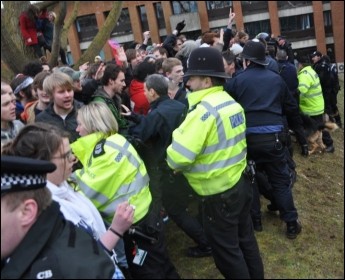 FOLLOWING A demonstration of hundreds at Sussex University against education cuts, 80 students occupied the main administration building on Wednesday 3 March. It coincided with the announcement of the result of the UCU lecturers' union ballot for strike action.

Just after entering the building we heard the news that, in the highest ever turnout for a Sussex UCU ballot, 76% had voted to strike to defend the 115 jobs that management plans to cut this year.

The majority of staff inside the building left as soon as we went in, many commenting on how polite we had been. Disgracefully though, Michael Farthing, vice chancellor at Sussex, claimed we were 'violent' and 'intimidating' and gave permission for the riot police to be brought to campus. 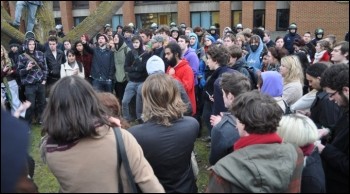 Within two hours, 16 police vehicles including dog units and police CCTV were lining the entrance to campus. Later that afternoon, a protest in support of the occupation gathered over 200 staff, students and union reps outside the building where a number tried to move past the police line to join the occupiers inside.

At this point the riot police moved in from where they had been on standby and beat back the crowd, threatening to use batons, dogs, tasers and CS spray.

Photo and video evidence shows police officers hitting, kicking and dragging protesters in a confrontation that ended in several injuries and two students being arrested.

Following this horrifying display of just how far management was willing to go to end the protest, the occupiers took the decision to come out on our own terms. 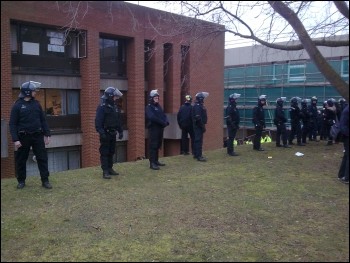 Wednesday's events have triggered anger throughout campus, particularly with members of staff, who rather than being put off strike action (as was clearly management's intention) are more determined than ever to win this fight.

Since then, six students have been suspended for supposedly being ringleaders of the occupation. This is despite the fact that one of the accused was only in the building for five minutes.

Michael Farthing and his cohorts are clearly trying to make an example of six key 'Stop the Cuts' activists in the hope this will make the campaign crumble. It has had exactly the opposite effect. Within two hours of us hearing of the suspensions, we mobilised over one hundred staff and students for a march on campus through halls of residences against the move.

Over the weekend, we collected almost 800 signatures to Reinstate the Sussex Six with messages of solidarity pouring in from across the country.

We are now more confident than ever that we can defeat management's proposals and hopefully bring about the resignation of key people involved with last week's repression of students.

Socialist Students will be mobilising support from students for the UCU strike when it is called.

Fight the cuts, not union members

Michael Foot - the end of an era

Canvassing for support for socialists in Lewisham

Justice for the Shrewsbury pickets

CWU to put Royal Mail deal to ballot of members