Above: Barking Youth Fight for Jobs video, part one

On Saturday 13 March Youth Fight for Jobs organised demonstrations and campaigning activity against youth unemployment, cuts in education and the racist BNP.

"Jobs and homes not racism" went the chants and placards of the 400 young people marching through Barking, east London, on the Youth Fight for Jobs (YFJ) demonstration. This lively and youthful protest march involved young people and trade union activists from across London and the south, including a number of local people.

With tens of thousands of jobs at the local Ford factory, Barking was a relatively well-off working class area. But now most of that is gone and Barking has been hit hard by unemployment.

The march passed a former campus of the University of East London which was demolished to build luxury houses, which are now left half built because of the crash in the property market. 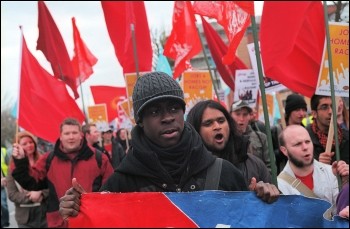 The demonstration's route also passed the bus depot, where black, white, Asian and eastern European workers recently took united strike action against management's attacks. YFJ highlighted that to unite as working class people in a common campaign is the only way to save our services. This approach was also demonstrated on the protest, with 50 members of Day-Mer youth, a Turkish and Kurdish organisation, participating and addressing the closing rally.

New Labour has abandoned workers in Barking and other working class areas. Why else underwrite the banking system to the tune of £1.2 trillion and then demand huge cuts in our public services?

Labour, together with the Tories and the LibDems, wants us to pay the price for the bosses' crisis. It is this anti-working class consensus in parliament that has allowed the far-right racist British National Party (BNP) to make its electoral gains.

The BNP is targeting this area in the general election and already has 12 councillors in Barking and Dagenham. However, Saturday's demonstration aimed to make it clear that the BNP does not offer a solution. Its alternative council budget involved huge cuts and the outrageous idea that families moving into Barking should have to live in caravans!

By posing as opposition to the Westminster system and pretending to stand up for white working class people the BNP attempts to present itself as an alternative to the three main pro-privatisation and pro-big business parties. But the BNP relies on telling racist lies and scapegoating black and Asian people, preventing united struggle. 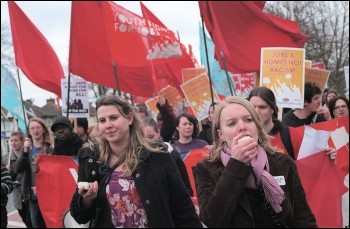 To highlight New Labour's role in opening the door to the BNP, YFJ also protested outside the constituency office of Margaret Hodge, the sitting MP for Barking, cabinet minister and millionaire. Unfortunately, Unite Against Fascism (UAF) organised activity in Barking on the same day, clashing with our event.

UAF is holding fortnightly days of action, but this was the first time they had produced leaflets calling for a mobilisation. UAF could have joined the march or both events could have been bigger had they been on different days.

YFJ activists have spent months working in the area, explaining to people what our campaign is about, the dead-end represented by the BNP and the need for an alternative based on the unity of working class and young people. We are now organising local meetings and a real fightback against mass youth unemployment. YFJ has also been invited to the local college. 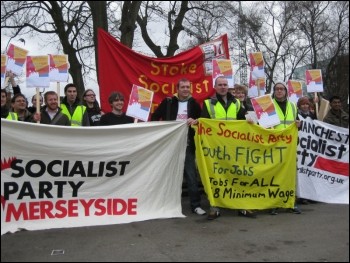 Young people marched through Manchester city centre on Saturday 13 March to oppose cuts and job losses at local universities and to raise awareness of the over 300,000 unemployed youth in the region.

Youth Fight for Jobs (YFJ) and Socialist Party members from Liverpool, Warrington and Stoke joined the demonstration. The march started at Manchester Metropolitan University, which was recently the scene of 127 job losses, adding to the 150 plus already lost at nearby Salford University.

The march was lively and loud and the public was vocal in its support as we arrived at Piccadilly Gardens, a popular local destination for young people, where a rally was held. 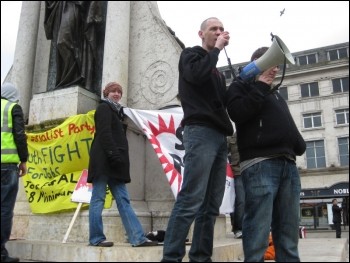 David Henry, Trade Unionist and Socialist Coalition candidate for Salford, addressed the crowd with a stirring speech about the lack of opportunities for young people in the area, compounded by the economic crisis; and the need to fight back against cuts to education and for real jobs.

Socialist Party member and PCS activist Steven Heyward also spoke of the need to bring together the industrial and educational sides of the struggle.

Following the rally around 25 people attended a very positive meeting led by Matt Dobson, the national coordinator of Socialist Students, to discuss the practical steps necessary to build YFJ further in the north west.

As part of the Youth Fight for Jobs day of action campaigning stalls were set up in Bradford, Doncaster and Hull. The racist English Defence League (EDL) were sighted in Doncaster a few weeks ago so we made a last minute alteration and moved our Rotherham activity to show that their poisonous ideas are not welcome and to put forward our alternative.

In Hull, activists were out and reported a lot of interest during the day. In Bradford, we had a similar response, but also heard about a youth festival taking place later in the day where we received even more interest and now have lots of names to contact to build YFJ in that city.

Yorkshire YFJ activists will be holding more local meetings in the next two weeks, and are also planning interventions into May Day demonstrations in the region.

The unconventional combination of socialism and metal music proved an attractive prospect for nearly 100 revellers at Trillian's rock bar in Newcastle on Thursday 11 March. With the YFJ logo displayed proudly on TV screens around the bar, the bands took to the stage and gave the crowd exactly what they came for: metal and lots of it.

Ignorance, Final Hour and Starblind were the flavours of the night, finishing up with an appeal for donations by YFJ activist and Ignorance guitarist Paul Phillips.

£200 was raised for YFJ which will be used to print leaflets and fliers for the upcoming May Day march through Newcastle and Gateshead.

Defending public education in the USA

Another general strike brings Greece to a halt

Thatcher's enemy within: 25 years after the end of the miners' strike

Fighting the cuts at Leeds University

Unite to save Northcott Theatre

Cuts mean poorest people priced out of the legal system