Link to this page: https://www.socialistparty.org.uk/articles/9106

The Socialist Party in Coventry officially launched its election campaign on Sunday afternoon, with well over 100 people cramming in to the venue.

Though this was the 'official' launch, campaigning for both the local and parliamentary elections has been taking place over a number of months.

Many different workers and ages were represented in the audience - postal workers, workers from the local authority, members of the RMT rail workers unions, school and university students, pensioner activists, veterans of the Anti Poll Tax campaign, the unemployed, and many more were present. 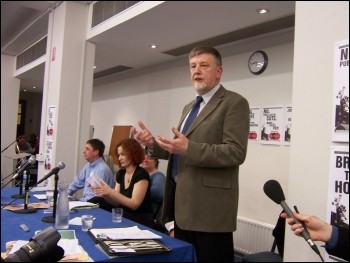 Dave Nellist, who will be parliamentary candidate for Coventry North East against Defence Minister Bob Ainsworth, gave a rousing speech outlining the present political situation, and how the three establishment parties disagree only on the detail of the timing of the huge cuts that will be taking place - the main difference between Tories and New Labour is that the Tories want to take six years to make the cuts and Labour want to do it in seven!

This has been reflected in events on Coventry City Council - the Tories proposed £72 million of cuts over the next 3 years and they were dutifully supported by the 'opposition' New Labour group - every single 'Labour' councillor voted for these cuts - with only the Socialists Dave Nellist and Rob Windsor voting against.

It is this sort of tweedle dum - tweedle dee situation which has motivated leading trade unionists to come together to form the Trade Unionist and Socialist Coalition, which we see as the beginning of a process that could lead to the formation of new independent party for working class people.

Bob Crow, general secretary of the RMT was scheduled to speak, however due to the impending strike taking place on the railways, he was unable to attend.

However, the audience heard from Manjit, a member of the TSSA union, who will be striking alongside their brothers and sisters in the RMT just after Easter.

He thanked the Socialist Party and Coventry TUC for their support in the recent dispute with Virgin Trains.

The meeting closed with Dave Griffiths outlining our election plans - we are aiming to stand in all three parliamentary seats in Coventry as well as an extended challenge in the local elections - this includes defending Rob Windsor's seat in the St Michaels ward.

After the meeting, many attendees signed nomination forms for our candidates, volunteered for leafleting and canvassing and also applied to join the Socialist Party.

We would urge people reading this to consider how YOU can help the Socialist challenge!