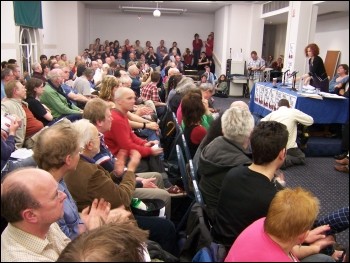 THE RUN up to the general election on 6 May has seen all the main parties promising to carry out savage cuts in public spending and to step up the attacks on working class communities. Why? Because they are united in believing that we - not the rich - should be paying the price for an economic crisis that we did not create.

Alistair Darling has boasted that if elected, New Labour's cuts will be deeper than those when Margaret Thatcher was in power. The Tories have made it clear that they will declare all-out war on public services, while the Lib Dems have promised "savage cuts".

Councillors in these three parties have implemented cuts in local councils across Britain, and in Scotland the SNP in local councils and at Holyrood has also taken an axe to jobs, services and the pay of public sector workers. We cannot afford to accept the lies of the main big business parties.

We didn't create this crisis. It was caused by the policies and actions of the bankers, the rich capitalists and their friends from all the main political parties, who put greed and profits before the interests of ordinary working class people.

It is nothing short of stinking hypocrisy to see MPs fiddling their expenses, pocketing pay rises and massive pensions beyond the dreams of low-paid workers, then they have the front to tell us that we have to pay the bill for their mistakes and greed. They are not on.

It's no surprise that trade unionists in the public and private sector have been taking strike action recently in defence of their jobs and working conditions. BA cabin crew, civil servants and railworkers have all been on strike against the onslaught that we all face by employers and the government.

What choice is there for workers, given the anti-trade union policies of New Labour, the Tories and the Lib Dems, other than to fight?

Tory leader David Cameron has praised Thatcher's anti-union crusade in the 1980s. Lib Dem leader Nick Clegg welcomed the defeat of the miners in 1984-85. And New Labour, after 13 years in power has not repealed even one of the draconian anti-trade union laws introduced by Thatcher.

The SNP leadership have come out against the RMT workers' strike at Scotrail. Their MSPs even criticised a Labour MSP who refused to cross a PCS picket line at the Scottish parliament recently. 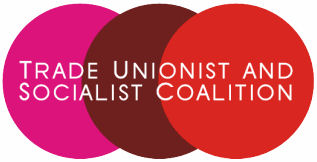 So who do workers, trade unionists and young people looking for an alternative turn to in this election? The Trade Unionist and Socialist Coalition (TUSC) has been set up precisely to give us a voice and one that stands up for workers in struggle.

TUSC is supported by important leaders of trade unions, including those who have been taking strike action recently. They include (all in a personal capacity) Bob Crow of the railworkers' RMT union, Janice Godrich and Chris Baugh of the PCS union, and Brian Caton, leader of the Prison Officers Association. Many other trade unionists with positions at a national or local level are supporting the new coalition.

TUSC is standing to offer a socialist alternative to the parties of the rich. We are standing for public ownership, not privatisation. For making the rich bankers and bosses pay for their economic crisis. Against cuts in public spending and in support of a united struggle against those bosses and big business politicians who want us to pay.

The Socialist Party in England and Wales and the International Socialists in Scotland are playing a central role in TUSC. Over 40 candidates are standing under the TUSC umbrella across Britain, including ten in Scotland. We are standing in the general election to oppose the onslaught of the bosses and to give working class people a real alternative to the misery of capitalism, poverty and cuts.

For more on TUSC go to www.tusc.org.uk