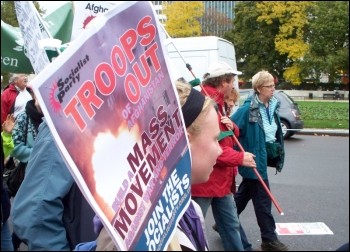 THE HORRIFIC loss of life in the war in Afghanistan should make it a major election issue. In this human catastrophe, tens of thousands of Afghan civilians have died since the war started in 2001. The war has also killed over 280 British soldiers, mostly young people, and over 1,400 other foreign troops.

Last year it was estimated that the Afghan war had already cost people in Britain £12 billion - that's enough to build 23 new hospitals or employ 60,000 new teachers or 77,000 new nurses. And its future cost is projected to be at least £5 billion each year.

This war is not being fought for the interests of ordinary Afghan people or for working-class people in Britain. It has not reduced, but increased, the threat of terrorist activity.

The war is being waged for the power and prestige of imperialist powers in the west, especially the US. And, like other policies supported by the establishment parties, for the future profit of multinational corporations.

Most parliamentary politicians' election slogan seems to be 'don't mention the war'. But 65% of people in a BBC opinion poll in Britain oppose the war - most people think it's unwinnable. Establishment politicians are trying to hide this bloodstained elephant in the living room.

US President Obama has stepped up the war, thrusting 30,000 more US soldiers into the battle. He hopes for backing from other governments, but the war is making Afghanistan even less stable.

Afghan president Hamid Karzai 'won' last year's elections largely through fraud. Since then, his despised capitalist puppet regime has failed to take decisive action in a country where people still struggle to survive without access to clean water, electricity and other essential amenities.

Karzai backs US action in areas held by the reactionary and repressive Taliban but Afghan people see the involvement of US and allied troops as akin to foreign occupation.

So, caught between pressure from foreign governments to do their bidding, from regional leaders and warlords, and from the desperate mass of workers and poor people, Karzai even threatened to join the Taliban if the west keeps pressuring him to carry out reforms such as tackling corruption!

The western powers are looking for alternatives to Karzai. But they cannot find non-corrupt alternatives who will be at their beck and call and help them salvage some stability from the war-torn country.

Socialists and the mass organisations of the working class need to put forward an alternative. The ranks of the British army are mainly working class - they should be withdrawn from Afghanistan immediately.

As said in the Socialist Party's manifesto (see centre pages): "This does not mean we accept that Afghanistan should be left to the reactionary Taliban and corrupt Karzai government.... Socialists believe in international working class solidarity.

"Through international cam-paigns, the trade union movement and the Committee for a Workers International we campaign for the right of the people of Afghanistan to decide their own future. We campaign against the corrupt elites [in Afghanistan - eds] and call for a workers' and peasants' government."