but who to vote for? 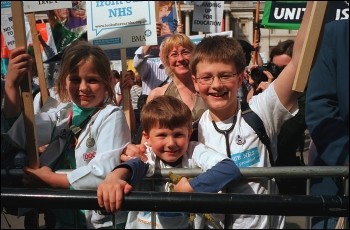 Workers and their families marched to Trafalgar Square on the trade union backed Save the Welfare State and Public Services demo, called by the National Pensioners Convention, photo Paul Mattsson   (Click to enlarge)

THOUSANDS OF trade unionists marched through the streets of London on 10 April on the 'save the welfare state and public services' demonstration.

This demo was called by the National Pensioners Convention and backed by virtually all the Trades Union Congress affiliated unions. The myriad of trade union banners, and hundreds of placards defending the NHS, education, council housing, pensions and pay, made it clearly a workers' movement event.

All the speakers from the various trade unions and campaigns agreed that whoever wins the general election, we face vicious cuts to our public services, and they all agreed that we need to stand together to defend them.

Alex Gordon from the RMT railworkers union and Brian Caton from the Prison Officers Association both underlined the need for united trade union action and warned of the threat of court action to stop democratically decided strikes. As Brian Caton said to cheers: "Bad laws should be broken".

Some of the trade union speakers implied that trade unionists should support Labour in the election to keep out the Tories but none of them appeared confident enough to say this outright.

A sign of the depth of anger against all the main parties was the presence on the platform of the leader of the British Medical Association, who called for an end to privatisation of the NHS and attacked all the main parties for being determined to keep the commercial 'internal market' in the health service.

The glaring question left unanswered by most speakers was: "If all the main parties are attacking our services, who do we vote for?"

It is no accident that leaflets for the Trade Unionist and Socialist Coalition (TUSC) when down extremely well, with several people asking for leaflets to take away with them. Socialist Party member Lee Vernon, speaking for a Brighton welfare rights campaign, explained the need for a new mass workers' party.

The Socialist Party has long called for a united national trade union demonstration in defence of public services, as a step towards united public sector strike action.

Unfortunately this demonstration was only a tiny example of what could be achieved.

Most of the national unions that supported the demo did not actively build for it beyond e-circulars. If the unions produced thousands of leaflets and held meetings up and down the country, outlining what is at stake and what kind of fight is needed, a demonstration could be organised a hundred times this size. That would be a really serious step in building for coordinated public sector strike action.