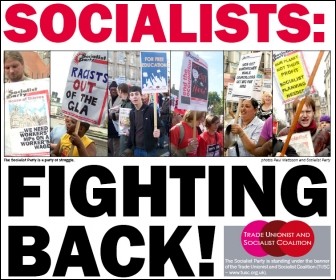 "What I say to people on the doorstep is we will only cut your throat slowly, the others will cut your head off" was a comment of New Labour MP for Blyth Valley in the North East, Ronnie Campbell, in a local paper. This message has been mirrored by New Labour chancellor Alistair Darling, when he admitted that public sector cuts will be 'deeper and tougher' than under the hated Tory regime of Margaret Thatcher.

This is the best a New Labour government is offering workers facing an uncertain future, that they will kill you more slowly than either a Tory or LibDem government. An increasing number of workers are drawing the conclusion that New Labour, Tories and LibDems are now nothing more than carbon copies of each other.

They are all offering a diet of cuts, cuts and more cuts. All of them are gearing up for ferocious attacks on public services.

The economy generally is showing signs of an extremely fragile and maybe temporary recovery but one commentator forebodingly remarked that "the starting gun has been fired on a public sector recession that is likely to last for several years". According to the research institute, Centre for Cities, 290,000 public sector jobs could go by 2014, and the Chartered Institute for Personnel and Development goes further and says that over 500,000 public sector jobs will be axed.

But while the big three parties tell working people to tighten our belts and brace ourselves for austerity measures, it's a different story for the bosses and bankers whose free market mess got us into this situation. This recession is hitting the shop-floor not the boardroom!

Tesco boss, Sir Terry Leahy, gets a massive 900 times more than an average Tesco worker. A hundred bankers from the bailed out RBS bank received bonuses of at least £1 million last year - that's more than many workers will earn in a lifetime.

All of this at a time when workers, such as redundant Corus workers from Teesside, are facing a bleak and uncertain future. It's champagne and caviare for the bosses, bread and water for redundant workers.

In Gateshead and Redcar two Socialist Party members, myself and Hannah Walter, are standing as general election candidates as part of the Trade Unionist and Socialist Coalition (TUSC). We are standing alongside other candidates in TUSC throughout Britain who have a proven track record of fighting cuts and privatisation.

Also, Socialist Party candidates have pledged to only take the average wage of a worker if elected. We are standing to give a fighting alternative to workers facing the knife being wielded by the three establishment parties.