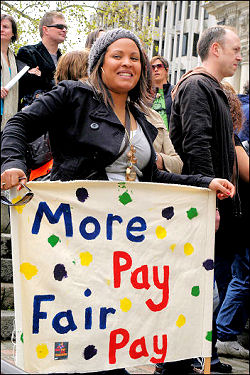 Teachers on strike on the 24th April , photo Paul Mattsson

The two main unions representing primary headteachers have both returned clear majorities in support of a boycott of this May's English and maths Key Stage 2 SATs tests for eleven year-olds.

Worried by recent legal threats against other unions, the NUT followed advice that it should only ballot members of the 'leadership group' who have the direct responsibility for administering SATs. The NAHT only represents these staff. So these results show the strength of opposition to the damage that SATs have inflicted on primary education even among school 'managers'.

Many heads and deputies, as well as classroom teachers, have seen their schools unfairly condemned as 'failing' through crude league tables of SATS results that take no account of the many different challenges facing schools. This bullying testing regime has enforced a narrowing of the curriculum. Many year six students have to spend much of their final year of primary education preparing for SATs. The administration of the tests also wastes £23 million a year.

NUT and NAHT members now have the opportunity to send a clear message to an incoming government that this wasteful and unreliable system has to be replaced with an assessment system that properly supports teaching and learning. Heads and classroom teachers must work together to build as widespread a boycott as possible.

Some parents, and perhaps some staff, may feel that it would be wrong to boycott now that so much of the 'drilling' in preparation for the SATs has already been done. They are mistaken. If even a partial boycott is launched this year, then teachers will feel more confident to stop 'teaching to the test' with a new year six from September.

The decision on whether to use the ballot results to launch a boycott rests with the NAHT national council meeting on 20 April and the NUT national executive meeting the following day. They must take the bold step of sanctioning the action that can start to get rid of these useless tests that have been imposed on schools for far too long.