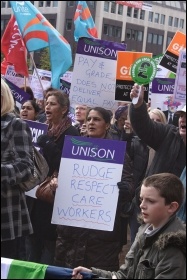 If the whole of the trade union movement, from top to bottom, was to launch a serious struggle against the cuts it would be impossible for the government to implement its programme.

Unfortunately, that has not been the case up until now.

In the coming months hundreds of thousands of workers, perhaps even millions, will be attracted to the trade union movement as they look for a way to fight the cuts.

If they are lucky they will join a trade union whose leadership has a clear and determined strategy to fight every cut. In many cases, this will not be the case.

Over the last twenty years an increased tendency in the leadership of the trade union movement, at national and sometimes at local level, has developed towards accepting the 'logic of the market' - that is, the logic of cutting workers' pay and conditions! Many trade union leaders have become used to administering defeat rather than leading a struggle to defend their members' interests.

This does not mean that workers should turn away from the trade unions. As 26 March shows, the trade union movement - which organises over six million workers - has enormous potential power.

However, in many cases in order to defeat the cuts it will also mean campaigning to transform the unions into democratic and fighting bodies.

This will mean campaigning to commit the trade union leaders to action, or if that proves impossible to replace them with leaders that will fight in their members' interests.

Other demands that will form an important part of the struggle will be for unions to be democratically controlled by their members and for all full-time officials to be regularly elected and to receive a workers' wage.

The National Shop Stewards Network has an important role to play in bringing together militant trade unionists from different sectors in order to share experiences.

It will also be necessary, however, to building fighting union lefts in every union.