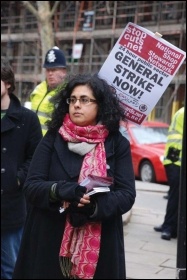 This government has declared war our living standards. Public sector workers, and many in the private sector, face huge job losses, pay freezes and attacks on their pensions.

Our NHS is being destroyed. Every single public service is being cutback.

If implemented the cuts would mean the destruction of huge swathes of the public sector. It is nonsense to suggest that cuts are good for the economy.

Much as the government denies it, its own Office for Budget Responsibility (OBR) told it that the first tranche of cuts alone would lead to 1.3 million job losses, including 700,000 private-sector jobs that are directly or indirectly dependent on the public sector.

This would mean a massive increase in unemployment, which will devastate particularly those places where the public sector is biggest. In Northern Ireland one third of the workforce works in the public sector, in Wales and the North East of England a quarter of the population do so.

When they are thrown onto the dole, those workers will find that benefits have been cut to starvation levels. More than one million people are going to lose up to 17% of their disposable income in 2011/12 as a result of the cuts in housing benefit alone.

Hundreds of thousands pushed into poverty 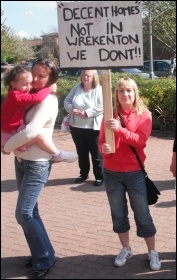 "There's a very real risk that these cuts will push hundreds of thousands of people into poverty, debt and even on to the streets if they end up being evicted."

Before the election the Tories said they would cut tax credits for well-off families - this now transpires to mean families with a household income over £25,000 a year! A couple who both earn the minimum wage would be on £21,000 a year - bringing up children on £25,000 would still leave them in dire poverty. Incapacity and disability benefit claimants are also facing cuts.

According to the Disability Alliance, nearly one in ten of those claiming the threatened Disability Living Allowance say that losing the benefit may make "life not worth living".

Public sector workers face a pay freeze and the undermining of their pension rights. But it is not just public-sector workers and benefit claimants who will be effected.

With a target of £113 billion a year reduction in public spending, (£9 billion more a year than is currently spent on the NHS!), the government is attempting the biggest cut in the standard of living of the majority for over 80 years.