Every struggle has its own characteristics. Neither the poll tax nor Liverpool is an exact model for the battle against cuts that needs to be waged today. 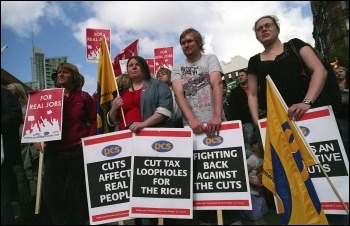 But the lessons of those struggles will need to be learnt if we are to succeed again. The most basic lesson is also the most important. Working-class people potentially have enormous power. We live in a society where wealth and power - the ownership of industry, finance, science and technique - is concentrated in the hands of a tiny minority.

Over the last 30 years that minority has been consistently enriched at the expense of the majority - the working class.

When New Labour left office the 'wealth gap' between the elite at the top and the poorest sections of society was the highest since the second world war.

If this government's programme is implemented that gap will grow far wider. However, potentially the seven million workers organised in trade unions represent an enormously powerful force to stop the cuts.

By taking strike action they have the potential to bring the country to a standstill. The trade union movement today has its greatest density in the public sector - where 84% of workplaces have a trade union presence.

It is, of course, in the interests of the tiny minority at the top - the capitalist class - to encourage feelings of defeatism, passivity and powerlessness.

It wants TINA (there is no alternative) to ring in our ears, drowning out the possibility of struggle. 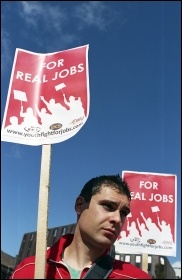 All three of the main parties act in the interests of that capitalist class. In the past the Labour Party - while it had a pro-capitalist leadership - at least was a workers' party at its base.

New Labour, however, is not fundamentally different to the other parties. Its opposition to the cuts is only limited to opposing the speed at which they are carried out, but they fully accept the necessity of the cuts.

Before the general election it pledged that, if elected, it would carry out a cuts programme "more brutal than Thatcher" and almost as brutal as Cameron and Clegg.

The capitalist media - owned by billionaires or, in the case of the BBC, run by the state - also pump out the TINA message.

But faced with cuts on this scale, no amount of propaganda will be able stop a fight-back. Mass movements are inevitable. If socialists do not put forward a strategy for victory, movements will take place regardless, but will take a more inchoate form.

The 20th century was full of demonstrations of the power of the working class to win victories. Unfortunately, they have not always been successful, in large part because of failures of leadership. 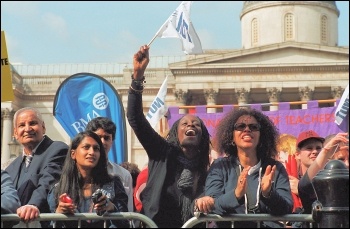 Workers and their families marched to Trafalgar Square on the trade union backed Save the Welfare State and Public Services demo, called by the National Pensioners Convention , photo Paul Mattsson   (Click to enlarge)

There was one general strike in Britain in the 20th century - in 1926 - which failed only because of the cowardice of the TUC leadership.

The difference with the poll tax and Liverpool was that those movements had a determined leadership armed with a correct programme.

We argue for the first step in the campaign against cuts to be a giant national demonstration, mobilising hundreds of thousands or more against the cuts.

This would immediately raise the confidence of everyone who participated, preparing the ground for the next stage of the struggle.

There is no doubt that the trade union movement could mobilise these kinds of numbers on this issue.

However, to do so would mean remembering the most basic lessons of the poll tax, of Liverpool and of innumerable other movements.

Organising a demonstration is not a matter of sending out an email and a press release, - a massive campaign is necessary - with millions of leaflets, mass postering, workplace or gate meetings organised by every trade union branch, coaches booked from every town and village.

Posters should be produced for people to stick in their windows, saying that they are joining the anti-cuts demonstration, with stickers and badges with the same message.

Unfortunately, these most basic methods of building up a movement need to be relearnt in big sections of the trade union movement.

Of course, a demonstration is only the beginning. For us it would act as a springboard for a one-day public-sector strike and towards a 24-hour general strike if the government does not retreat.

However, an important aspect of successfully prosecuting a struggle is to be able to recognise what stage the movement is at, and what next step is therefore appropriate.

In Greece our sister section is raising the need to extend the general strikes. In Britain, where the cuts have not yet hit in reality and battle is not yet engaged, a massive national demonstration is an important first step.

Another factor is that different countries have different traditions. General strikes, for example, are far more frequent in Southern Europe than in most countries of Northern Europe, including Britain.

This means that given Britain's history even a 24-hour public-sector general strike would terrify the government and the capitalist class and enormously raise the confidence of the working class.