Uniting the movement will need to have an organisational, as well as a political form. In both Liverpool and the poll tax Militant played a key political role. However, contrary to the slurs against us by the capitalist media, our political leadership was not imposed on the movement or carried out by sleight of hand. 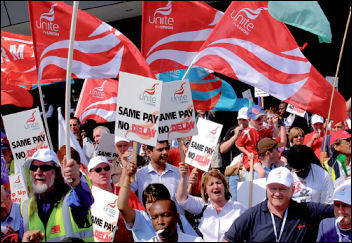 On the contrary we won the political arguments in the democratic organisations which were organising the struggle, within which we were in a minority.

Both in the anti-poll tax unions and the Liverpool District Labour Party (which would be attended by 500+ delegates - unimaginable in today's moribund New Labour) tactics and strategy were discussed out and debated at every stage of the struggle.

Such democratic workers' organisations take different forms in different struggles. They reached their highest level in history in the workers' councils (soviets) that led the Russian revolution of 1917.

While not yet on that level, in any mass struggle there is a tendency for democratic organising bodies to develop that can play a vital role in leading the struggle.

Today, the Socialist Party is at the forefront of establishing 'anti-cuts unions' which are mushrooming up around the country.

In most areas they involve representatives from local trade unions, tenants' associations, pensioners' organisations, Youth Fight for Jobs groups and others.

As in the early days of the anti-poll tax campaign these campaigns are disparate at this stage, with different names and different structures in different towns.

This is an inevitable first stage of the campaign but, before long, it will be necessary to bring them together into some kind of national structure.

To take on and defeat a government requires a nationally co-ordinated movement. However, it will not work for a few individuals to declare that they have founded the national anti-cuts movement.

What will be necessary, again as in the poll tax, will be the coming together of the struggles on the ground to form a democratic national body with weight and authority. 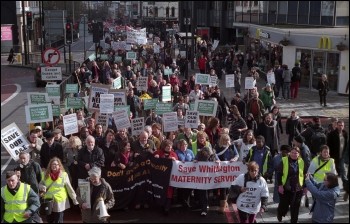 The priority at this stage is to build the authority and roots of the local campaigns. The issues they will concentrate on campaigning on will vary. For many the immediate issue is the huge cuts being carried out by local councils, often Labour led.

In London compulsory redundancies in the fire service are going to be a huge issue unless management retreats.

The anti-cuts unions will need to take up each individual campaign, including mobilising support for industrial action by the public-sector trade unions - be it fire-fighters, transport workers, teachers, civil servants or local authority workers.

At the same time they will need to link the individual campaigns to the slogan 'stop the cuts'. Even though non-payment obviously does not apply, many of the other methods of the anti-poll tax unions and of Liverpool city council will.

Regular public meetings, protests, demonstrations, window bills and badges declaring membership of the anti-cuts unions, all these methods and more will be used.

This kind of actions, appealing not so much to MPs' better nature as to their fear of losing their seats, can also be an important aspect to the general mass campaigning.

The anti-cuts campaigns will need to exert particular pressure on the 'little axe-men and women' to whom the government has given the task of implementing cuts.

Every council meeting that is carrying out cuts should face mass lobbies from the local anti-cuts bodies demanding that they refuse to carry out the cuts and instead put forward a 'needs budget'.

This demand does not only apply to councils but also school governors who are proposing their school becomes an academy, or directors of NHS Primary Care Trusts that are proposing to hand services to private contractors, or the Vice-Chancellor's Executive Groups of universities that are planning to close departments.

In every case we should aim to conduct mass campaigns explaining the alternative to accepting the role of butchering public services.

We would offer solidarity if they are prepared to launch to stand firm against the cuts, while also making it clear that they will face a determined mass opposition if they take on the role of butcher.