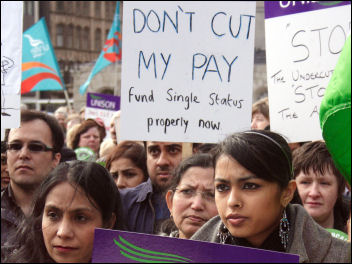 There is no doubt that Cameron and co are making the same mistake again.

Before the general election Tory MP Philip Hammond, then shadow treasury secretary, said there would be no mass trade union protest under a Tory government, as trade union leaders were only doing their job when they "came out and rattled their sabres" at the TUC congress.

Behind the scenes, he said, the shadow cabinet had established "cordial relations" with them. Unfortunately, it is all too likely that the majority of union leaders see the best way of defending their members against the government as establishing 'cordial' that is supine, relations with it.

This was also the case when Thatcher came to power. Her government responded to the trade union leaders' friendly overtures by launching an onslaught on the trade union movement and workers' rights.

Cameron is no different.

If the whole of the trade union movement, from top to bottom, was to launch a serious struggle against the cuts it would be impossible for the government to implement its programme.

However, the experience of the poll tax demonstrates that we cannot rely on the trade union leadership to lead.

As today, trade union activists played a crucial role in that struggle. But at national level, the unions' opposition to the poll tax remained in words, and was never translated into action.

This is not explained away because taxation is not directly a 'workplace issue'. A large element of the Tories' aim in introducing the tax was to undermine democratically elected local councils and pave the way for privatisation of public services.

This would have had hugely detrimental consequences for local authority workers. It was in the interests of every public-sector trade unionist to make sure it was defeated. Unfortunately, however, when it came to organising mass non-payment, not just as an idea but in practise, the leadership of the trade union movement ran a mile.

Nor were they prepared to prosecute a serious campaign for non-collection of the tax by public-sector workers.

At one stage the Scottish TUC proposed an eleven-minute strike but that was the limit of the action it was willing to call! It was left to the Militant (forerunners of the Socialist Party), alongside other trade unionists and socialists, to lead the struggle for mass non-payment of the poll tax.

Since that time there has been an increased tendency in the leadership of the trade union movement towards accepting the 'logic of the market' - that is, the logic of cutting workers' pay and conditions! Many trade union leaders have become used to administering defeat rather than leading a struggle to defend their members' interests. 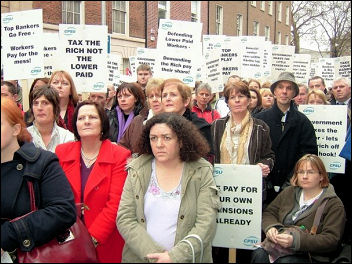 This is the role the leadership of the Irish trade union movement played in the first round of the struggle against cuts at the end of 2009.

Faced with pay cuts for public sector workers of between 15-19% the Irish TUC was under enormous pressure to call action and it did call a 24-hour public sector general strike which was fantastically supported.

Far from using it to lead a serious struggle, however, it merely hoped to bring the government back into talks.

This self-inflicted defeat has inevitably led to bitterness, anger and a certain temporary demoralisation among Irish trade unionists.

But it is not the end of the story. The cuts are continuing and a second round of struggle will develop. At the same time a new generation is beginning to learn from the experience and draw conclusions about the need to get organised in the unions to fight for them to act in their interests.

These experiences do not mean that we ignore the official structures of the movement. In the battle against cuts today the trade unions are likely to play a more central role than during the poll tax.

This is because the struggle to prevent cuts in the workplaces will be so central - against job losses, pay freezes, and the smashing of public sector pensions.

But even in the poll tax, while largely 'unofficial' due to the abdication of the trade union leaders, militant trade unionists did all they could to pressure their national leaderships to act at every stage during the struggle. 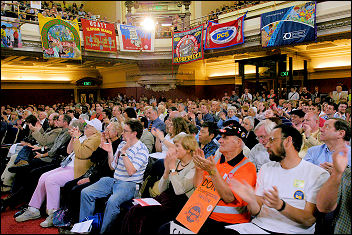 In addition to the local and sectional strikes which are already developing as workers fight to stave off particular attacks, generalised action will also be needed.

The anti-trade union laws will be raised as an obstacle to this. They are the most repressive in the advanced capitalist world, and were left intact by New Labour. We are not in favour of taking unnecessary risks with the trade unions' resources and funds. However, such is the severity of the cuts that action cannot be left to individual trade unions, generalised action must be organised.

Even with the existence of these laws, it may be possible to co-ordinate the sectional action that different unions will be taking in order to take a serious step towards a public-sector strike.

Today, we have unions - such as the RMT and PCS - which have fighting left-wing leaderships. These unions will have a vital role to play, not only in leading the struggle of their own members, but as acting as a pole of attraction in order to galvanise the trade union movement as a whole.

Even in the most right-wing led trade unions, in the end it is the union members who are their power source - and the members' dues pay the leaderships' wages.

Right wing leaderships can, therefore, be forced to move under mass pressure from their members or, if they refuse to, be pushed aside.

While Derek Simpson, joint general secretary of UNITE, has outrageously opposed widespread industrial action against the cuts, arguing that instead unions should "try to educate people about the impact of big cuts" Dave Prentis, general secretary of UNISON, has, under huge pressure, promised that the government "won't know what has hit them", if it attacks the public sector, and that UNISON is "ready to fight".

This is to be welcomed, although it is in contradiction to his record of witch-hunting the best UNISON anti-cuts activists.

We need to build the widest possible alliance against the cuts. However, it will be in practise that the fighting talk of Dave Prentis will be tested. The most effective pressure is to show that a mass movement is possible by starting to build one. Initiatives like the National Shop Stewards Network lobby of the TUC Conference - demanding it leads a real fightback against the cuts - play an important role not only in putting pressure on the leadership of the TUC but also in giving confidence to workers that a movement is possible.

The National Shop Stewards Network, which has been successfully linking together militant trade unionists for four years, is likely to come into its own as a means of co-ordinating the workplace fight against the cuts.

At the same time there will be stages where the community campaigns - against cuts and closures in local services - will lead the way and help to give confidence to the workforce to fight back.