The Scale of the Problem of the Environmental Threat 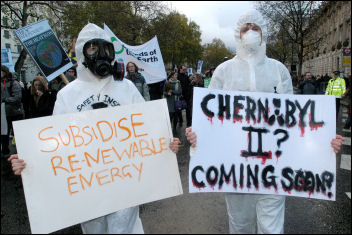 The scale of the environmental threats facing us need to be understood, so that the difficulty in mitigating and then eliminating them can be estimated.

The solution to the issue of nuclear waste storage will require huge resources to find a safe method of disposal.

Even though governments round the world currently have no answers, they continue to pour out more and more toxic waste, content to leave the problem to future generations.

The depletion of the ozone layer is a question of coping for a 100 years with the effects of a 20th Century disaster, a legacy of the free market system.

Although nuclear waste disposal and ozone depletion both pose a threat to our long-term future, ranging in time from 100-100,000 years, the question of global warming is potentially even much more serious.

One expert has warned that: "human induced global warming, then, could possibly start a chain reaction of events that could lead to the extinction of civilization or even humanity. This is a remote possibility, but it exists" (quoted in 'Counting the Cost of Global Warming', by J Broome, White Horse Press, Cambridge, 1992, page 16).

All economic activity requires from the environment raw materials and energy as factor inputs, and an ability to deal with wastes and maintain a global balance (e.g. in surface temperature). Although these functions have been under pressure since the mass production of commodities ushered in the modern capitalist epoch over 200 years ago, only recently has evidence emerged that they are breaking down completely.

Reducing environmental intensity is the key factor in trying to deal with the polluting effects of increased consumption.

Environmental intensity is the pollution produced per unit of consumption (e.g. the amount of carbon dioxide produced in making a tonne of steel), and it has been suggested that there are three ways a reduction in its value can be achieved.

The first is changing the composition of output to less damaging products, the second is to substitute harmful economic inputs such as fossil fuels with renewable energy sources, and the last is to develop new technology to increase the efficiency of the use of resources.

A fourth possibility is to decrease environmental intensity by changing not just the technical aspects of production, but also the social, an issue that will be explored later.

It has been calculated that the impact on the environment resulting from all sources of pollution must be reduced by 50% to ensure sustainable growth.

This means that environmental intensity must be reduced by more than 10 times if it assumed that consumption and population increase significantly.

Detailed calculations are given in the Appendix. (Some environmental groups, such as Friends of the Earth put the needed reduction in environmental intensity up to five times higher than that stated above).