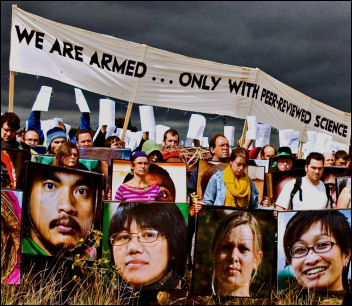 Most capitalist politicians now pay lip service to sustainability, so what are the prescriptions they are putting forward to achieve this? Before considering the solutions put forward by the neo-liberal theorists, it is worth emphasising further the scale of the task they are facing.

On the crucial question of global warming, the US Department of Energy estimated in 1998 that the cost of cutting CO2 emissions to 7% below their 1990 levels would rise to 4% of US GDP by 2010, or in money terms $400 billion per year.

Although this figure is certainly exaggerated as a result of scare-mongering by the US energy lobby (other calculations put comparable GDP figures rising to 1%-3% after a much longer time) the general scale of costs is clear, and would lead to massive tax rises for the multi-nationals.

The classic method put forward by the neo-liberal school to take account of environmental damage is the property rights approach, which relies on direct negotiations between the parties affected to resolve the issue.

This requires that the property rights to the use of environmental resources are defined and owned by someone.

It is easy to see the practical difficulties in implementing this scheme. For instance, it is hard to see what system of private ownership could be imposed on the stratosphere, and even if it was, the number of people affected by its malfunctioning runs into billions, all of whom could seek redress from the owner, making the method unworkable.

This practical difficulty in using the property rights approach has even struck some die hard free-marketeers and an alternative system based on controlling pollution through the price mechanism has been worked out, the so called 'make the polluter pay' principle.

The preferred route this takes is by the trading of pollution permits, issued by a government at a price reflecting the environmental costs and covering a specific geographical area.

Leaving aside for the moment the fiasco of the Kyoto permit trading experience, it is not difficult to see that this scheme would be ineffective.

For instance, the cost of building flood defences in Bangladesh in 20 years time, needed because of global warming due to emissions by US corporations today, would not be included in the permit price, meaning that the polluter is not really paying at all. 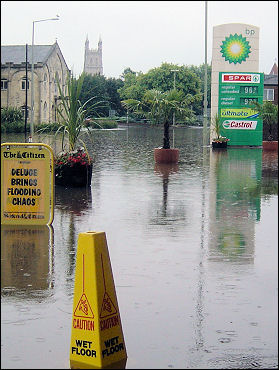 An alternative to the permit system is the introduction of an eco-tax, although this is regarded as a dangerously 'socialist' idea by the neo-liberals, compared to the free trading of permits.

The principle however is the same, that by increasing the price of polluting resources, there will be an incentive created to use them less and seek substitutes.

Evidence to show this works is put forward by comparing the experience of the USA and some other advanced capitalist countries.

Energy prices in the US are a third of those in countries like Norway, whereas their emissions of carbon are about three times greater per unit of GDP (quoted in 'The North, the South and the Environment' Edited by V Bhaskar and A Glynn, Earthscan, 1995. p139), thus the tax mechanism seems to work.

The issue is not so simple however when examined in more detail. France, for instance, has a relatively good greenhouse gas performance because she introduced nuclear power on a massive scale, which purely coincidentally does not produce greenhouse gases.

This was done for political reasons, not because the price of fossil fuel was high, therefore questioning the link between high fossil fuel cost and low pollution emission.

Also, the evidence shows that key economic factors that help create sustainability, e.g. the development of new non-polluting technology, would not be promoted to a significant extent by adjusting prices through eco-taxes.

Even if taxes could play some role in reducing pollution, there is the question of scale to be considered.

The cost to the US, given earlier at $400 billion per year, for significant cuts in greenhouse gases shows that for such a programme to be effective tax increases would have to be huge, more than a 100% according to some estimates.

This would devastate the profits of big business and make them politically impossible to impose. It is significant that in Scandinavian countries where some form of eco-tax has been implemented, companies are specifically excluded from paying, and the whole burden is put on individuals.

Another consequence of eco-taxes is that the poor are hit hardest by their introduction because the cost of warmth and cooking, usually provided by fossil fuels, is a large proportion of their income.

On a different level, this regressive effect also applies to congestion charges, such as those proposed by the London Mayor in Britain, Ken Livingston, to promote the use of public transport.

Cost benefit analysis (CBA) is potentially a powerful tool to assess environmental risks and to reach a rational decision about future investment.

Its success depends however, on defining clearly what the costs and benefits are, and for all the parties involved to agree on these definitions.

Where profit is as stake this is easier said than done. In capitalist terms, risks must be expressed in money terms and probabilities of future adverse events clearly determined.

When this cannot be done, which is the usual case, environmental risks are ignored, and a system of ordinary discounting is used.

Using this method, it has been calculated that the cost of a nuclear accident, 500 years in the future, costing £10 billion at current prices to future generations, would be 25 pence, discounted at 5%.

In other words, if a CBA was made now about building such a power station, 25 pence would go in the costs column to allow for a future accident.

The reasons why none of them have ever been implemented on any significant scale are much more important than the individual criticisms that can be made of each.

The thinking elements of the capitalist class internationally realise that an abyss is looming, so why can't they take really decisive action?

The central contradiction of capitalism from the beginning of the 20th Century till the present day has been its inability to resolve the conflicting needs of profit driven production and the continuing existence of nation states.

In their quest for profit, the capitalists are forced to look for new markets beyond their borders as their own market becomes saturated, bringing them into conflict with rivals from other countries who are under similar pressures.

In abstract terms, the rivals could co-operate to more efficiently exploit the rest of the world if the market was continually expanding, but this is never the case for long with capitalism, as bust always follows boom.

When the market turns down, the tensions grow between the international rivals and the big corporations look once more to their own governments to protect their profits.

This cycle will occur again soon as the drive to globalisation is undermined by the developing downturn.

Any genuine solution to the environmental crisis must be international since all the main threats, such as global warming, ozone depletion, or nuclear toxic waste contamination affect the entire earth or large parts of it.

However, the main capitalist countries that account for the majority of pollution will never meaningfully co-operate if the profits of 'their' multinationals are significantly affected.

This is particularly true in a recession, and is the problem that lies at the heart of the environmental crisis.