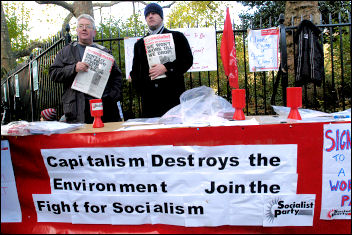 The fiasco over the Kyoto agreement is a good example to demonstrate the inability of the capitalist system to tackle the crisis.

Kyoto is intended to tackle global warming by cutting greenhouse gas emissions by a small amount in order to go back to the 1990 level, in itself a modest target.

The justification was that this was the maximum that was politically feasible, but even this tiny and cheap step forward, done at a time of economic boom, proved to be totally unacceptable to the USA.

The agreement was fixed so that no actual reductions in greenhouse gases in the advanced capitalist countries (ACCs) were called for.

Instead, a system of tradable permits was introduced, the preferred 'free market' mechanism, where the ACCs could buy the rights to pollute from other countries that were below their quota.

This was possible because, very conveniently, the base year from which calculations were made was 1990, just before the economic slump in the former Soviet Union and Eastern Europe caused their greenhouse gas output to fall by 50%.

This meant that East European states would have a large 'surplus' of tradable permits to sell to the ACCs, probably at very reasonable prices considering their desperate plight.

Why did the US Congress vote virtually unanimously to reject this almost completely cosmetic deal? It was probably not because the immediate price was unacceptable, since they had reached an agreement, although belated, on the Ozone issue that incurred costs to US companies.

It was because they regarded this as the thin end of the wedge, where, eventually, meaningful cuts would have to be made.

Since the US produces 25% of all greenhouse gases, almost twice as much as their principal rivals in the EU, their profits would be disproportionately hit by meaningful cuts.

The lesson here is that if small sacrifices only are needed, and they can be evenly distributed between rival capitalists, as in the ozone case of CFC reductions, then limited agreements can be made (although it is doubtful that even this would apply in conditions of recession or slump).

However, if profits are seriously under threat, then even limited agreement is impossible, and this particularly applies if the dominant world power, the USA, is the biggest potential loser. 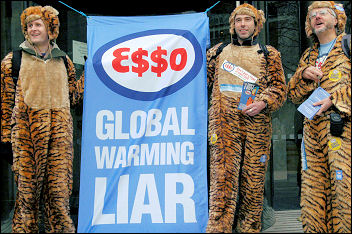 Direct state intervention to reduce pollution, although still operating within the framework of a market driven society, has been largely discarded as an option by the dominant neo-liberal alchemists, who dismissively label it 'command and control'.

Some pro-capitalist commentators though are beginning to reconsider this attitude, because they think direct intervention may actually work, in contrast to neo-liberal theorising.

A strategy that they propose is to impose a legally enforceable set of standards to control emissions, but other options could also include more radical measures.

For instance, to redirect production to non-polluting sectors, to restrict consumer choice to eco-friendly products or to prescribe that energy should be produced by renewable sources.

As the environmental crisis deepens, the attractiveness of this approach will grow, particularly to those on the left or active in the green movement who can see the impotence of purely market based ideas.

Although state intervention could have an effect if it was applied in the all the major polluting countries in a large-scale manner over the long-term, the question is-will it be? It is possible that an individual country will begin to implement small-scale environment-friendly measures, such as in Germany now, or in Scandinavia.

However, as soon as the level of investment by the state threatens profits through higher taxes, as it must if the measures are to be sufficiently large scale to be effective, the big companies will scream that their international competitiveness is being undermined.

Since in the context of capitalism, the priority of the government of each country is to protect the interests of the multi-national companies based inside their borders, any meaningful environmental programme will then be dropped.

The requirement to solve the crisis, which is to have international agreements capable of tackling the scale of the problem, remain the same, as do the reasons why they will not happen.

Although it is theoretically possible that the bacon will be pulled out of the environmental fire by a fortuitous new invention, for example, a technology like nuclear fusion that promised to produce large quantities of energy cheaply and without pollution, there is nothing viable on the horizon.

The market system has been unable to provide the scientific breakthroughs that are needed. One of the reasons is that under monopoly capitalism, new technology is the result of long-term incremental advances by teams of scientists and engineers working for big bureaucracies in multi-national corporations, where to change course to a radically different direction is very difficult due to bureaucracy.

Furthermore, the huge costs of developing the new approaches that are needed in the energy field deter most companies from entering the market.

Also since the lure of profit is still ultimately the reason for investment in new technology, it will be introduced in those sectors that are most profitable in the short and medium term, i.e. for fossil fuel technology rather than renewable energy generation.

Sustainable growth on a capitalist basis is not feasible, partly because the methods it can employ to achieve this are inadequate and flawed, but mainly because imperialist rivalry will prevent the international co-operation that is essential to make progress.

The result is that the world will continue to hurtle headlong to disaster since the environment will still be treated as a 'free good' by the multi-nationals that dominate production and will be exploited at no cost to themselves.