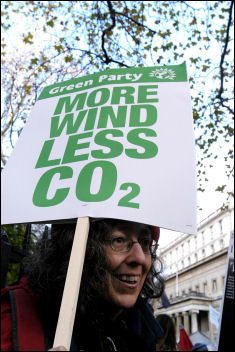 There are many variations of the Green and environmental movement agenda, so any categorisation must be approximate and recognise that there is overlap between them.

Bearing this in mind, it is still possible to identify three basic trends or approaches. The first two are models based on market solutions, albeit with significant state involvement and the third is sometimes called eco-socialist, where market forces are not the dominating feature.

The 'mainstream' market approach asserts the central need for a steady state economy. Steady state was defined by its initial proponent and guru of the movement, Hermann Daly, as fixing absolute limits both to human population and to the 'population' of artefacts (goods).

The question of population control is controversial but putting a limit to the production of goods is a common feature of most green policies.

The programme of the Greens in Britain includes import/export controls, control on multi-nationals through exchange controls and control on speculation through the Tobin tax, limits on the size of monopolies and tax breaks for new small firms entering the market.

At the centre of the programme though is a complex system of eco-taxes and permits to encourage environmentally friendly behaviour which, it is claimed, will lay the basis for a steady state economy.

What would be the implications of a steady state economy? If steady state is defined as zero consumption growth from present levels, a 66% reduction in environmental intensity would be needed for sustainability.

This assumes the widely predicted large population increase in the 'South' and a small one in the 'North'.

However, if it is true, as most greens believe, that this level of reduction in environmental intensity is not feasible, then consumption will have to fall to close the gap.

If consumption must decline, what implications does this have for the green programme to redistribute the 'surplus' from the North to the South to establish a fair and equal world? If we assume, on the grounds of fairness and equality, that cuts are limited to the main polluters in the industrialised countries, consumption per head will have to be reduced significantly.

In these circumstances the scope for redistributing the industrialised countries' 'surplus' consumption to the rest of the world would be very limited, since it would have shrunk enormously.

This is true with steady state defined as here, as meaning zero consumption growth, most greens advocate a cut in consumption, which would reduce the surplus even further.

The Greens correctly make the point that definitions of consumption are based on GNP (Gross National Product) calculations that are boosted by the costs of clearing up environmental damage.

The argument goes that since growth in GNP is a policy objective of all governments there is no incentive to cut pollution, because the pollution itself is contributing to GNP growth.

The conclusion made by the Greens is that if the definition of GNP is changed to eliminate this effect, governments will change growth policy in an environmentally friendly way.

Apart from the technical difficulties in doing this, the reasoning assumes that government policy can fundamentally control economic growth.

Capitalist states all have a desire for growth, since growth boosts profits, but making desire become reality is not so easy, because the market system is out of the control of any firm, however big, or country, even the USA.

Since the system has its own internal logic based on the international competition for markets and the quest for profit, governments can affect what happens only to a small extent.

This is graphically shown by the current economic downturn that is resolutely refusing to respond to the recipes of the capitalist experts.

However, the question of compensating for the 'polluting' effect of growth projections will need to be addressed when society really is in control of the economy, i.e. in a non-capitalist system.

Socialists and greens agree that the exploitation of the environment is linked directly to the activities of the monopoly corporations, 500 of which dominate the world economy.

Is the answer, as the greens claim, to go back to societies where small local firms operate in a steady state market system? Leaving aside the impossibility of turning back the wheel of history in this way, if such a system was created, the fundamental law of the market would still apply, i.e.

a need for continuous growth and an unlimited increase in production. This is because the capitalist market is anonymous and dominated by the laws of competition. Each industrialist tries to grab as large a share of the market as possible, but to do this requires cutting prices without threatening profit.

The only way to achieve this is to reduce the cost of production by cutting the value of commodities, via reducing the labour time necessary to produce them, in order to produce more commodities in the same length of time.

To bring about such an increase in production, capital must be invested to rationalise the labour process, and the only source of this capital, in the final analysis, is profit.

In other words, the dynamic of the system is the constant accumulation of capital, driven by competition, and paid for by the surplus value (profit) produced in the course of production itself.

This feature of the capitalist economy, analysed by Marx, fundamentally undermines the proponents of the small, steady state market economy, because the absolute need will always be there for it to grow and break out of any controls on economic expansion that might be imposed by a green government.

In such circumstances, monopolies would eventually emerge, as Marx predicted they would when analysing the dynamics of growth of pre-monopoly capitalism in the nineteenth century.

The green macro-economic programme is based on limiting the operation of the market internationally through exchange controls, limiting capital flows and speculation and imposing import-export controls.

Despite the internationalist outlook of most greens, this programme points in the opposite direction, towards a siege economy which will foster national prejudices and preclude the international co-operation needed for sustainability.

Also, the plank of the green programme to ensure international co-operation, i.e. imposing tariffs on countries that refuse to implement environmentally friendly policies, would lead to conflict.

The USA has the most to lose, since it is the biggest polluter, and it would use its dominance to punish any international trade body or country that attempted to go down this path.

It might be argued that the large degree of state control necessary for a siege economy could lead to the establishment of a steady state environmentally friendly society, albeit only on a national basis.

However, even if a government went a long way down the road of state control, if the market remained, the growth dynamic would eventually reassert itself.

In these circumstances, if the state continued to stand in the way of expansion and profits, conflict would be inevitable.

During the Labour government in Britain in the 1970s, there was ferocious resistance by the capitalists, including the plotting of a coup by some elements, when the Prime Minister, Wilson, took half a step in the direction of a programme that had some similarities to that of the greens.

In the end, a 'green' government would either have to capitulate to the demands of the market or move to abolish it.

Even if an eco-capitalist siege economy could maintain itself for a period, the measures in the green programme to reduce pollution, based on market mechanisms such as eco-taxes and permits, would be inadequate.

They would also lead to more inequality, contrary to the stated aims of the Greens, since eco-taxes hit the poorest hardest.