For decades working-class people have had no voice in Westminster. The establishment parties - not least New Labour - all acted in the interests of the capitalist class.

Labour had become one more party acting in the interests of the 1% - supporting pay restraint, cuts, privatisation and war.

The Tories won the 2015 general election not because they were popular - on the contrary, only 24% of the electorate voted for them - but because of Labour's failure to offer any alternative.

Despite the lowest level of support of any government since the introduction of universal suffrage, the Tories scraped to power because Labour's 'austerity-lite' programme was incapable of inspiring voters.

Millions protested by not voting at all or by voting for Ukip, the Greens, the Trade Unionist and Socialist Coalition (TUSC) or others.

The Labour leadership contest that followed the general election provided an unexpected opportunity for the working class to gain a voice in parliament.

Jeremy Corbyn only got on the ballot paper as a result of right-wing MPs nominating a candidate they believed was a no-hoper out of 'charity'.

Little did they foresee that the new Labour Party rules - designed to destroy what remained of the trade unions' voice in Labour - would inadvertently give an opportunity for hundreds of thousands of people - mainly from outside the Labour Party - to vote for Jeremy Corbyn.

They did so because of what he stood for: opposition to austerity, £10-an-hour minimum wage, mass council house building, free education, renationalisation of the railways and energy companies.

But as we warned from the beginning there was never any possibility of the Labour right accepting Jeremy Corbyn's leadership.

Instead they have been determined from day one to force him out as soon as the opportunity arose. In effect Labour is now two parties in one: a pro-capitalist party on the one side, and a potential new anti-austerity party on the other.

Standing behind and egging on the pro-capitalist wing of the Labour Party is the capitalist class, which is desperate to once again block the voice of the working class out of Westminster.

The excuse the Blairites give - that Jeremy Corbyn could never win a general election - is not their real motivation.

On the contrary, their greatest fear is that he might! Blair himself said that Jeremy Corbyn as prime minister would "be a very dangerous experiment"; an experiment his acolytes are determined to prevent.

The Socialist Party has consistently warned that it is counterproductive to compromise with the Labour right.

Attempts to pacify them only embolden them to step up their offensive. Unfortunately in the last year a number of compromises did take place, including not calling for deselection of Blairite MPs, agreeing to the right's demands to call for a Remain vote in the EU referendum, and refusing to make a clear call for Labour councils to stop carrying out cuts in public services.

None of this prevented 172 Labour MPs passing a vote of no confidence in Corbyn in the hope of bullying him into resigning.

If, as is likely, Jeremy again wins the leadership election, it will be vital that there are no compromises with Blairites.

Instead the movement in support of Corbyn needs to be organised and built upon to consolidate and extend the gains that have been made.

On that basis there is a real possibility that the outcome of this struggle will be the coming into existence of a mass party that stands for the 99% instead of the 1%, and has a clear anti-austerity programme.

That would be a huge step forward for working-class people in Britain, and the Socialist Party will do all we can to assist in the development of such a party. 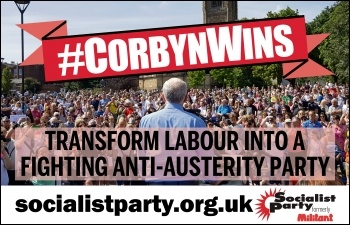 Right-wing Labour MPs are threatening to split away - particularly if they face deselection. They seem to think they have a God-given right to be MPs! We say that mandatory reselection should be introduced - so that party members have the democratic right to choose who stands for parliament on their behalf.

If MPs choose to split away under this threat, let them go! A refounded Labour Party would have no room for MPs who vote for cuts, austerity, privatisation and war.

In fact we would propose that Jeremy Corbyn only gives the whip to those Labour MPs who are prepared to sign up to a clear anti-austerity programme.

It would be a major error to water down opposition to austerity in a desperate effort to get unity with the Blairites.

Unity with the Blairites is no different - in essence - from proposing unity with the Tories. Both act in the interests of the capitalist class, whereas the new anti-austerity party in formation around Corbyn has diametrically opposed class interests.

This applies locally as well as nationally. Since 2010, local councils' budgets have been cut by almost 40% on average.

One million local government workers have lost their jobs and countless local services have closed. Without exception Labour councils have loyally implemented these Tory cuts.

Yet there have been calls from the three major local government trade unions - Unison, GMB and Unite - for councils to set no-cuts budgets.

If Labour councils across Britain refused to implement any more cuts they would have huge popular support, and could build a movement that could defeat the government and even force an early general election.

Many Labour supporters will fear that a right split would weaken the Labour Party. In fact the opposite would be the case.

True, a Blairite split away would - at least initially - decrease the number of Labour MPs in Westminster.

But a smaller group of MPs who consistently campaigned against austerity and defended workers in struggle, would do far more to strengthen the fightback against the Tories than 232 'Labour' MPs, a majority of whom vote for austerity, privatisation and war.

A refounded anti-austerity Labour Party could quickly make electoral gains - as was demonstrated by the 2015 election of Syriza in Greece, initially on an anti-austerity platform, and by the growth in support for the left in Spain.

Such a refounded Labour Party would need an open, democratic, federal structure, along the lines of the Labour Party's structure in its earliest days.

It would need to launch a fight against austerity, whoever it is implemented by: Brussels, Westminster or local councils.

Such a stand - including a £10-an-hour minimum wage, free education, repeal of the anti-trade union laws, nationalisation of the rail and energy companies, and mass council housebuilding - would be able to enthuse millions, including many of those who showed their anger at the existing order by voting for exit in the EU referendum.

In essence it would mean the formation of a new radical workers' party, able to attract all those workers and youth wanting to fight back against capitalism.