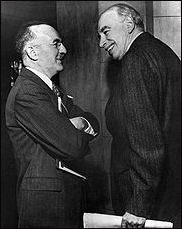 John Maynard Keynes (on right) at the Bretton Woods conference

The deregulated 'free market' associated with Thatcherism is discredited. For many workers this will mean turning towards socialist ideas. For the representatives of capitalism, however, it is a question of trying to find a way to restore the profits of world capitalism as quickly as possible.

In order to do so they have dug up Keynes - whose economic theories had been dismissed as irrelevant by those in power for thirty years.

As Keynes himself once aptly put it: "When the facts change I change my mind. What do you do sir?" New Labour has partially taken this advice. Keynesian measures have been implemented alongside a continuation of neo-liberal attacks on the working class.

The Keynesian steps they have taken have, so far, prevented a complete collapse of the banking system.

However, they have not prevented a devastating recession. Keynes argued that the state should respond to a recession by increasing spending in order to stimulate demand.

However, up until now the 'stimulus packages' have not stimulated demand by increasing public spending or wages, but have been aimed almost purely at propping up the financial sector.

This is different to what happened during the Great Depression in the US when the Keynesian New Deal was implemented by Franklin D Roosevelt.

The US's government spending increased by 80%, including public works programmes, although the total size of the public sector was much smaller than now.

Today, having built up huge deficits bailing out the finance system, the representatives of capitalism are strongly resistant to carrying a modern 'New Deal'.

Even Roosevelt's New Deal, although it did have some effect, partially because it was carried out as the economy was beginning to revive, could not solve the scourge of mass unemployment.

With all its associated horrors, only the onset of the second world war brought about close to full employment, with increased call-up to the armed forces and men and women pulled into the war economy.

Nor did the Keynesian policies instituted in Japan in the 1990s prevent its 'lost decade' of economic stagnation.

At the same time, it is the working class that is expected to pay the price for the resulting increased national debts of governments.

When the stimulus packages began, we warned that sooner or later the working class would be expected to pay for this via increased taxation and future cuts in public expenditure.

In Britain, all three establishment parties seem set on making sure that the working class pays sooner rather than later.

David Blanchflower, previously a member of the Bank of England's monetary policy committee, correctly declared that: "The Tories economic proposals have the potential to push the British economy into a death spiral of decline that would be almost impossible to reverse for a generation." (The Guardian 9 October, 2009)

The fear of Blanchflower, along with other serious economic commentators, is that the stimulus packages may be reversed too early.

This happened with the stalling of the New Deal during the Great Depression in the US in 1936/37, resulting in a sharp deepening of the economic crisis.

Blanchflower is right to point out that the Tories' policies, which if implemented would put 700,000 public sector workers on the dole, could lead to a severe deepening of the crisis.

Unfortunately, the policies of New Labour and the Liberal Democrats are in essence the same as the Tories.

Any government which accepts the logic of the market also accepts that it is necessary to cut the size of the public deficit at some point.

The debate between the capitalists is not about if, but when and how the working class pays for the crisis.

The short-sighted nature of the British ruling class means that a majority seem to be backing the Tories' 'slash and burn' approach.

We do not accept that the working class should pay for the capitalist crisis. A determined, militant struggle against the onslaught of big business needs to be prepared for.