No to austerity - for a party for the majority, not a tiny elite

Can the unions 'reclaim' Labour for the working class?

For councillors who fight cuts

For workers' representatives on a worker's wage

Socialism - the answer for humanity and our environment

For a 24-hour general strike

Why you should join 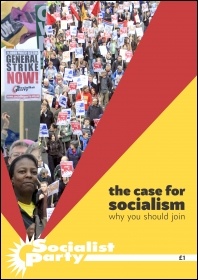 When the Sunday Times first published its annual Rich List in 1989, the combined wealth of the 200 richest people in Britain was £38 billion (£80 billion in today's money).

In 2013 it had increased to £318.2 billion. Prolonged economic crisis has meant growing impoverishment for the majority but it has not halted the enrichment of a few at the top of British society.

Bankers' bonuses were up 64% in 2013 to a new record, a direct result of chancellor George Osborne cutting the top rate of income tax to 45% two months earlier.

A tiny elite is being showered with gold while the rest of us are trampled down into the dirt. The living standards of the majority are being squeezed hard.

The Resolution Foundation shows the median wage has fallen by £3,200 since 2009, to £21,700. Young people are, on average, 20% worse off than they would have been before the recession.

A quarter of a million more children live in poverty today than when the Tories were last in power in the 1990s.

Benefit cuts and the bedroom tax have left the poorest in society in desperate poverty.

Hopes that the economic crisis was an aberration and life would soon return to 'normal' have faded as austerity has become the new normal.

A massive 65% of people now say that they expect their children to have a much harder life than they have had.

A profound anger is developing at the meagre future that British capitalism is offering. At the moment, however, that anger has no viable outlet.

When the trade unions have called national demonstrations against austerity they have had huge turnouts.

In 2012, when a number of trade union leaders raised the need for a general strike against austerity, opinion polls showed that more than 80% of people would support such action.

The trade union leaders have, however, so far failed to call a 24-hour general strike - or any large-scale co-ordinated strike action.

In the absence of a clear call to action by a mass force it is no wonder that millions of people feel enraged, but can see no way to effectively fight back.

Others are fighting back on important single issues like opposition to the bedroom tax or the closure of local hospitals.

The current relative calm on the surface of British society cannot last. In country after country we have seen mass revolts against austerity - from Greece, Spain and Portugal to Turkey and Brazil.

Even in previously quiet Sweden riots have shaken the inner cities. The question in Britain is not whether the seeming calm will be broken, but whether it will be broken in an organised powerful movement - capable of defeating the government - or if it will be broken by riots or other desperate and incoherent outbursts of anger.

The Socialist Party is doing all that is within our power to try and ensure that the coming struggle in Britain is united, powerful, based on the working class and capable of defeating austerity.

We play a leading role in many campaigns, from the struggle for a general strike, to the campaign against the bedroom tax, to the battle to save the NHS. We are also working to popularise the socialist alternative to austerity.

The last five years have demonstrated beyond doubt to millions that capitalism means crisis and misery.

This short pamphlet outlines what the Socialist Party stands for, and how we think it can be achieved. If you agree - join us! 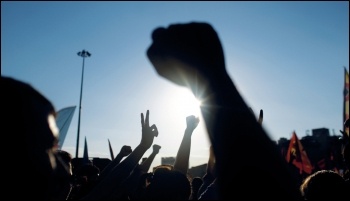