Women and the Struggle for Socialism: Introduction

Part one A history of women’s oppression
1 Have women always been oppressed?

2 The role of the family

3 The family under capitalism

4 The family and women's oppression today

3. What happened in Russia? 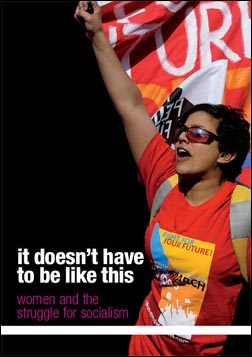 Women and the Struggle for Socialism

At the turn of the millennium we were promised that women's equality was just around the corner - and to many it really did seem possible. We had travelled such a long way compared to our grandparents and even our parents' generations. Legally women had the same rights as men, girls were outper¬forming boys in school and the labour market was so transformed that in some countries women had become a majority of the workforce. Economic and social changes were undermining traditional ideas about men and women's roles in society and significantly altering personal relations.

But scratch the surface and the old inequalities and discrimination had not disappeared. Despite laws against inequality, women's wages in the more econom¬ically developed countries were still on average much lower than those of men. So most women continued to shoulder the main responsibility for childcare and housework, leaving them feeling exhausted, guilty and unfulfilled. Every week two women were dying as a result of domestic violence.

This was the reality for millions of women even before the worst economic crisis since the 1930s wreaked its havoc around the globe.

What consequences will the crisis and its aftermath have for women? Will the important changes that have already taken place withstand the effects of this dramatic new period or will the film of history begin to unwind? Are inequality, discrimination and oppression an inevitable part of our lives?

This book argues that it doesn't have to be like this. It is true that discrimination and oppression have been in existence for thousands of years. However, as chapter one explains, women have not always been second-class citizens. For the majority of human history we lived in societies where this was not the case. Of course, our conditions of existence are worlds apart today. But if there was a time in the past when oppression did not exist then a future without it is also possible.

But how can we fight back? Should women try and transform themselves, should they try and alter men or is a fundamental change of the economic system needed? Should women fight on their own, together with other women or united with men? Can we change things bit by bit or is a more radical transformation necessary?

We attempt to briefly address all of these questions from a socialist and Marxist point of view and to dispel some of the confusion which surrounds the issue of women's oppression today.

Part One traces the history of women's oppression until the present day. It shows how oppression was connected to the emergence, around 10,000 years ago, of class¬

based societies in which the family became a basic social structure. It explains how capitalism, the dominant form of class society today, underpins and reinforces the problems which women still continue to face and how ending oppression is linked to ending capitalism and class society.

Part Two looks at how we can organise to fight for women's liberation. It argues that it is important to fight for every improvement possible in the lives of women but, because of the way in which capitalism is structured and organised, real libera¬tion cannot be achieved through gradual reform of the current system. A radical transformation of the way in which society is structured is needed. The main struggle is not one of women against men, or of women changing themselves, but of women organising and uniting with working class men to end capitalism and replace it with a socialist society.

Socialism would transform the lives of women and men. This book gives a glimpse of how life could be different and how another world free from discrimina¬tion, inequality and oppression is possible.