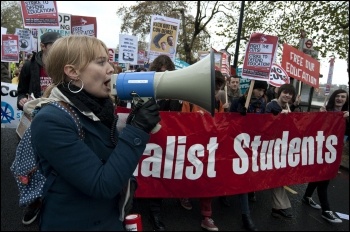 Sheffield student union was the first in Britain to organise a campus-wide anti-cuts campaign in response to the call for a national demonstration in November: the newly elected student union officers saw it as a chance to mobilise students and to build a permanent anti-cuts group on campus after the demonstration.

Socialist Students welcomed this move with open arms, participating effectively in mass meetings of up to 150 students, as well as playing a leading role in organising and building the campaign. 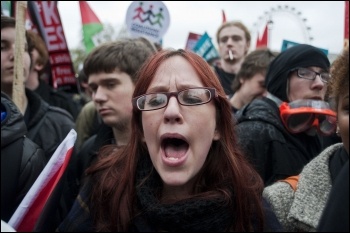 Reflecting the political shift on campuses since the last student demo in 2010, the general student body was much more receptive to the ideas being discussed in mass meetings than might be expected, considering that the NUS nationally has done little if anything to publicise the demonstration or the demands we are fighting for.

Sheffield University took five coaches, as well as a coach from Hallam University - around 250 students in total.

The mood on the coaches was certainly upbeat and spirits were not diminished by the fact that the turnout was significantly less than in 2010. The odds were stacked against us, with the bad weather, a deathly silent NUS national bureaucracy, and threats of police intimidation bound to reduce numbers.

The march itself was noisy and vibrant, with many loudhailers, chants and samba bands accompanying us. But the wind and rain (which gave rise to many inventive chants such as "It's raining, it's pouring, the Tories are appalling") began to take its toll on morale, especially as the NUS march took us directly away from Parliament.

Many students attempted to block the way across Westminster Bridge, in an attempt to keep the march in central London.

Most Sheffield students followed the NUS route out to Kennington Park, where the mood slowly soured.

Simmering resentment at the inaction of the NUS made itself more and more evident, with spontaneous chants of 'general strike!' and 'NUS, shame on you, where the f**k have you brought us to?' Eventually, a number of students pushed past security and President Liam Burns was pelted with eggs and forced to make a shamefaced retreat. 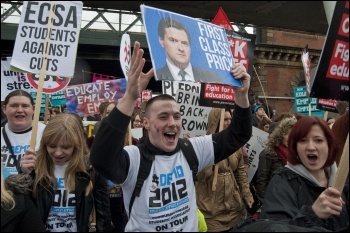 Students on the NUS national demonstration 12 November against the government attacks on university education, photo Paul Mattsson   (Click to enlarge)

The Guardian characterised the march as a shambles of "eggs, fruit and anger", lacking coherence or political purpose. Nothing could be further from the truth. The NUS is an organisation in a state of transition, subject to enormous pressure from below to use its legitimacy to lead the struggle against attacks on our education. The 'storming' of the stage was not political infighting, but an expression of frustration from an increasingly radical but constrained student movement.