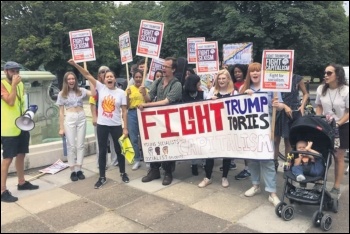 Portsmouth will not be welcoming President Trump for an official state visit on 5 June. And where the leader of the richest capitalist nation in the world is not met with hatred or despair then he is met with ridicule.

And rightly so. Trump is a sexist, racist bigot, hell-bent on engineering an environment for him and his wealthy mates to get even richer. To top it off he claims that the biggest threat to our planet - capitalist-induced climate change - is a hoax!

Thousands of young people across the world have walked out of their classrooms in recent weeks to defend our planet's environment. Trump's objective is to continue to ruthlessly exploit workers and the planet. We say: build the student walkouts to stop him!

Last year Socialist Students led student walk-outs and joined thousands of other young people protesting Trump's visit to Britain. This time school students have already got a taste of the action in the youth strikes against climate change.

Socialist Students calls for the formation of school students' unions to coordinate the struggle, develop the demands and continue to build the movement. They could play a vital role in defending the right to protest using our collective strength.

Trump is a representative of a capitalist system that is failing to provide for the working class and youth in the US, Britain and worldwide. It is for that reason that he and his counterparts around the world sow division and hatred, to stop fingers being pointed at them and the system they represent.

But the fingers are already pointing in that direction! Many on the tremendous youth strikes this year have raised the slogan "system change, not climate change!"

Well, that system is capitalism and the alternative to it - which can protect the environment, achieve sustainable production and put wealth and power into the hands of the working class - is socialism. That's why we call for "socialist change, not climate change".

Join the walkouts in June to make it happen!