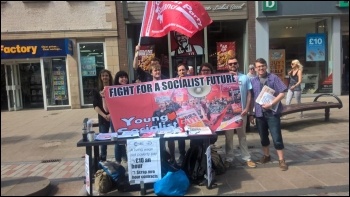 Members of the 'Young Socialists - Young Workers' Rights' campaign met for a national day of action in Dundee city centre on 6 August. We demanded a minimum wage of £10 an hour and the scrapping of zero-hour contracts. Our call on young workers to join trade unions was met with a warm response.

We teamed up to talk to workers inside JD sports, Subway, Burger King, McDonald's and Home Bargains. One young worker in Subway asked for a further handful of leaflets to hand out to other members of staff and hang up in the break room. We then marched through the city centre calling on young workers to join the Young Socialists and the fight for a proper living wage.

We can see parallels with "primitive accumulation" - Marx's description of how capitalists came to own the means of production in the first place - in Brazil's far-right president Jair Bolsonaro opening up increased logging in the Amazon rainforest. And we can see a new global capitalist crisis on the way in both the trade war between China and the US and the related stock market fluctuations over the past days and weeks.

But of course the most central finding of Marx was that of "surplus value." While at their job, workers create more value through their labour than they receive back in their wages.

Where does this "surplus" go? To the boss - who in Marx's time might have reinvested some in expanding production. Nowadays the capitalists are reluctant even to invest.

This relationship between boss and worker creates a tension in the workplace which expresses itself through class struggle. The Socialist Party views Marx's economic theories not as academic pieces but as a call to action, for the working class to take hold of the economic levers in society and turn them to a democratic plan of production...