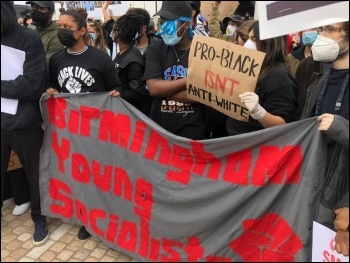 Millions of working-class and young people are being made to shoulder the cost of the Covid-19 pandemic and a new economic crisis with their jobs, pay and futures. But the magnificent mass movement against racism has shown that young people are ready to fight back.

The extent of the new economic slump which has struck British and world capitalism unravels further day by day. GDP - a measure of the total output of capitalist economies - has collapsed. Production and trade have fallen off a cliff edge.

Big business and its political parties will always look towards the working class to pay when their system enters crisis. This crisis will be no different.

To prevent total collapse, the Tory government has been forced to prop the capitalist system up with measures totalling hundreds of billions of pounds. The super-rich and the Tories are going to fight tooth and nail to make the working-class majority pay for it.

Young people will be first in the firing line. Young workers have been some of the worst-affected so far by a crisis which is still unfolding. It's the consumer-facing industries where young people are mainly concentrated - such as hospitality and retail, which have naturally been hardest hit by a lockdown on public activity.

As such, more than one in three 18 to 24-year-olds are now earning less than before the coronavirus outbreak. Out of all age groups, 18 to 24-year-olds have suffered the greatest number of furloughs (read: a 20% wage cut) - and job losses.

What's clear is that this won't simply be a temporary 'blip' of hardship for young people. One think tank, the Resolution Foundation, predicts that by the end of the year, 600,000 more young people will be made unemployed, taking the total to over a million. Mass youth unemployment is posed.

And the crisis threatens to cast a long shadow over the longer-term futures of young people too. Additional research by the Resolution Foundation predicts that in three years' time, employment rates for mid and low-skilled workers who enter the labour market now, during the crisis, could fall by 27% and 37% respectively. Even for graduates, it's projected to be a 13% fall.

All young workers will suffer. But those from black, Asian and minority ethnic (BAME) backgrounds, who already experience discrimination, are likely to suffer even more. The UK's official unemployment rate was 3.9% in the first three months of this year, but for BAME workers it was 6.3%.

On the basis of capitalism, the future hasn't looked this bleak for young people for a very long time. Many will be looking for how best to fight for their futures in the midst of this new crisis.

Big business and their political representatives, especially the Tory government, are also searching for potential solutions. Let's not be fooled, however - this isn't because they suddenly care about young people and our futures. Their priority will always be to act in the best interests of big business, and do what's best to protect their profits.

But they understand they are risking a massive explosion of anger from young people who face devastating attacks. The overwhelmingly young and working-class protesters marching against racism are also angry about the lack of decent jobs, homes and services. This mood could develop into a threat to the Tories' own continuation in government - and more broadly, even to the rule of the super-rich who they represent.

Boris Johnson at a recent Downing Street briefing spoke about providing a new apprenticeship scheme for young people facing a future on the dole. Aside from saying that young people in particular should be given an apprenticeship, Johnson remained woolly on the details of what such a scheme would look like.

It's no wonder. Tory apprenticeship schemes in the past have offered no path for young people into a decent and independent life.

Just ask the thousands of apprentices paid £4.15 an hour for their hard work, many of whom have now been left without a job. Or the thousands of young people who were forced to work for free for employers to earn their dole money in scandalous Tory 'workfare' schemes.

The Trades Union Congress (TUC) - the umbrella organisation for all Britain's unions - has also entered the discussion, with its report, 'A new plan for jobs'. This outlines the threat of long-term unemployment facing working-class people - in particular young people, who are two-and-a-half times more likely to work in a sector which is now shut down.

But apart from correctly outlining the desperate situation, the TUC completely fails either to put forward the programme necessary for providing young people with a decent future, or to chart the action necessary to win such a programme.

The report states that the economic crisis presents "an opportunity to help create good, secure jobs in all parts of the UK." It makes a series of recommendations to the Tory government. The summation is that the government should create a scheme to provide those facing long-term unemployment with new jobs - for six months!

The TUC hopes this will ensure young people get the skills they need to act as a stepping stone into permanent work. But what permanent work? It even goes so far as to say that ensuring a minimum six-month job would represent "meaningful and sustainable work"!

Young people don't need more bogus apprenticeships or training schemes to do the office tea and coffee. We need genuine training for the skills necessary to do skilled work. And rather than the current, pitiful 'youth rates' of pay, we need living, trade union rates of pay.

The Socialist Party demands the abolition of youth rates. We campaign for the unions to fight for an immediate increase in the minimum wage to £12 an hour, as a step towards a real living wage of at least £15 an hour.

And crucially, we need a full-time job guaranteed at the end of our training, not just to be left on the scrapheap after it's finished.

A key part of the struggle for all this would be unionising young workers, and fighting to establish democratic trade union and workers' monitoring and control of any training and apprenticeships schemes.

This could ensure decent wages and conditions, and that proper skills are taught. It could also stop the bosses trying to replace existing staff with newer or younger workers on lower wages and worse conditions.

These are the kinds of bold demands the so-called leadership of the workers' movement, the TUC, should be putting forward and leading a fight for. And if the TUC won't do it, the left union leaders should step up.

We absolutely cannot leave it up to the Tories to decide what young people can or can't have in terms of a future. Young people, whether in work, in study, or unemployed, need to get organised and fight them for what we need.

Yet despite the Tory track record, the TUC has said the pandemic has revealed the need for "more collaborative working between government, employers, working people"! Who could possibly conclude, from the events of the pandemic and its aftermath, the need for more collaboration with the Tory government and the big business employers they represent?

While the rich have been given billions in bailouts, workers and young people have been forced to sacrifice our jobs - and even our lives. We need less Tory collaboration, and more fighting, collective action!

In order to ensure a decent future for young and working-class people, including the availability of a decent, well-paying job for all, control of society must not any longer be left in the hands of the super-rich and their Tory representatives.

The coronavirus has graphically demonstrated that the market cannot deliver. It failed to deliver on the life-or-death questions of PPE, ventilators and mass testing. Why should we believe it can deliver on the issues of a job and access to decent training for all?

Despite the failures of the market, there is more than enough wealth in society to provide everyone with a decent job. But with the capitalist economy in a long-term crisis, big business has no route to making profits for its owners through mass investment and job creation. Never mind that the alternative will mean destitution for millions - on the basis of capitalism, if it isn't profitable, it's a no-go.

The question should be: who owns and controls society's vast wealth? We stand for taking the top 150 biggest businesses and banks into democratic public ownership, controlled and managed by the working-class majority. Workers and young people could start to plan society's resources to provide the majority with what we need, not to enrich a tiny handful at the top.

Such a plan could start with a democratic discussion throughout the whole of society about what kind of work needs doing, and from that which kind of socially useful jobs need maintaining or creating.

Part of that discussion would have to be focussed around a massive programme of job creation in green energy and an environmentally sustainable economy. Workers in the fossil fuel industries could be reskilled and redeployed without loss of pay.

From there, working-class and young people could direct the mass investment necessary into a programme of socially useful job creation. In the process this could provide young people with appropriate apprenticeship and training schemes, under the democratic control of the working class itself - not the lying and hypocritical Tories.

This would ensure that trainees are paid a real living wage with decent conditions, linked to a job guarantee at the end of training. And on this basis - a socialist basis - the economy could not only could guarantee a livelihood for all young and working-class people, but a free and quality education, access to affordable housing, quality public services, and more.

Working-class people, as the coronavirus pandemic has demonstrated, are the ones in the best position to make decisions about how society should be run. In a new era of capitalist economic crisis - with the backdrop of a killer virus, and a climate crisis which threatens the future of all humanity - the task of reorganising society to meet the social needs of all becomes an ever-more-urgent task.

To achieve all these gains and make them permanent, the fight for every improvement - higher wages, more jobs, better homes - must be linked to the fight to overturn capitalism, and transform society in a socialist direction. That fight can begin with young people saying that we are not going to pay for this crisis with our futures.

A socialist charter for young people