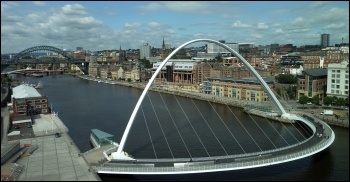 There's a sense of weary resignation in the North East as around two million people across seven council areas have coronavirus restrictions imposed.

In early August, we had the lowest official rate of Covid-19 across the country. However, as with other parts of the UK, there was unease as children started going back to the classroom.

Then every night we began to get reports on the local news of confirmed Covid cases in schools, with children and school staff having to go into self-isolation. Also the news that for the first time since July, over 100 people were on ventilators in the region.

This time around, far more than in March when the initial lockdown began, there is simmering anger at how inept the government is. This is particularly the case over test and trace.

In Sunderland there was mayhem as people were forced to queue in a two-mile traffic jam to be tested for Covid, only to be told by police to turn around as there was no one there to swab people!

One woman caught up in this fiasco spoke on the radio about her experience. Her child was ill with Covid symptoms. She'd been given a slot at the Sunderland testing centre.

After waiting an hour with an ill child in the car, she was told the testing wasn't going ahead. She immediately went on her mobile to book a test elsewhere. Imagine her anger when she saw the appointment was for the same test centre that she was being turned away from - they were still sending people there!

Others in the region have been given slots at various centres, turned up at the allocated time, but turned away because they hadn't received QR codes. Others were told the nearest testing was in Scotland. All this chaos is replicated across the country.

One leading scientist who had been invited to check out the outsourced 'Lighthouse Labs' said that testing "is dying on its arse." Among other things, he was appalled by the lack of staff.

At the beginning of this pandemic, there was a prevailing mood to give the government a chance. This was a new virus, and many felt that perhaps it was understandable they didn't get everything right.

But this goodwill has been squandered by the utter incompetence of Johnson, his government, and his chief political adviser Dominic Cummings. Cummings is viewed like 'Typhoid Mary' locally, potentially spreading the virus to our region.

This time around, far more people are questioning things. Clearly a layer of low-paid workers will have no option but to break the rules or risk losing their jobs.

It's all over social media - you can meet up, but only if there is a till! There's an understanding that for the Tories, profit comes before health. Growing anger has also been turned towards local councils.

Amid all of this, there is clearly an attempt to blame young people for this latest spike in Covid cases. This includes establishment media attempts to whip up anger about hedonistic young people out partying.

For the estimated 40,000 students arriving at Newcastle's two universities, instead of a warm Geordie welcome, they will be met by police patrolling student hubs! To add insult to injury, it is the universities who are coughing up the money for the extra policing - money that should be going towards students' education.

Workers and young people from across the country must join forces to fight this callous Tory government, whose first, second and third priority is the profits of big business.