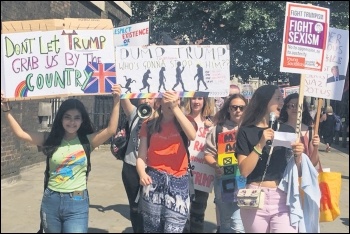 Anger has been growing in schools for a long time. Decades of underfunding, increasing class sizes and growing pressure around exam results have created schools which feel more like exam factories then places of creativity and learning.

This is linked to the slow loss of a say in our schools as many have been converted into academies, losing democratic structures. But, in reality, we never had a real say in our education.

Protests like those at Pimlico Academy, where students carried out a sit-down strike outside the school on 31 March, are therefore more likely. The spray painting said "Pimlico academy... run by racists...for profit". The students were protesting, amongst other things, a new school uniform policy which targeted black students' hair styles and the brightness of hijabs.

This and other changes came the year after the huge BLM movement, many of which happened down the road from Pimlico outside the new US embassy in London.

National Education Union members at the school have voted overwhelmingly in favour of a motion of no-confidence in the headteacher and for moving towards a ballot for industrial action. Their grievances include unacceptable management style, not providing a safe working environment for staff, and unreasonable workload.

Racism must be challenged in our schools alongside sexism and sexual harassment, the extent of which has recently been exposed.

The students at Pimlico can already see why racist ideas have been relied upon in the uniform - it's because the school is run like a business. It isn't run to give the best education to students. It isn't run in the interests or needs of the local community. It is run to help line the back pockets of anyone who can get contracts with the school.

So if profit is part of the problem, the solution has to be kicking profit motives out of our schools. To do this we will need to build school student unions and mass struggle. Part of our fight has to be for a genuine say in how our schools our run. We want real democratic community control of our local schools so that parents, teachers and students can oppose sexism and racism and have a say, not just in dress codes but also in the curriculum and how it is taught.