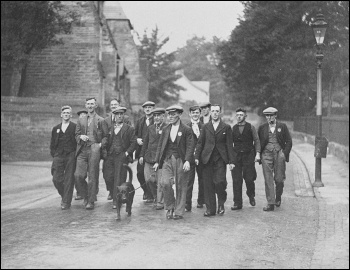 "Realising only by the abolition of this hideous capitalist system can the horror of unemployment be removed from our midst, I here and now take upon myself a binding oath, to never cease from active strife against this system until capitalism is abolished and our country and its resources truly belong to the people."

With this oath running through their minds, thousands of unemployed workers set off in November 1922 from all parts of Britain, with every main road carrying marchers, braving snow and rain to descend on London. Cheer after cheer arose in Hyde Park and it seethed with excitement as contingents arrived. News spread that Scottish marchers had linked up with their comrades from the North of England and were approaching. The sound of Welshmen could be heard singing as a London band and East End dockers led them into the park.

Numbers swelled to 70,000 as they descended on parliament - to be met with row after row of police - to protest mass unemployment in the first hunger march organised by the National Unemployed Workers' Movement (NUWM).

This was a time of mass unemployment, industrial unrest, capitalist crisis and the scars of a recent flu pandemic. A hundred years on, the situation facing the working class is relatable.

Following the slaughter of World War One, Prime Minister David Lloyd George promised a "land fit for heroes", but by spring 1921, millions were unemployed, some 23.4% of Britain's workforce.

But it was also a period of revolution, with the workers and rural poor in Russia, led by the Bolsheviks, taking power in 1917, and the end of the carnage of WW1. There followed revolutionary movements across Europe, including strikes, mutinies and the formation of communist parties modelled on Russia's revolutionaries.

The Communist Party of Great Britain, which had only been formed in 1920, set about organising the country's unemployed with the formation of the NUWM on 15 April 1921.

Protests and action by unemployed workers had already taken place. It was common for groups to march separately along places like Oxford Street in London, demonstrating and collecting money. But the NUWM was set up to organise the unemployed into a mass, organised movement.

The NUWM adopted the principle of 'work or full maintenance at trade union rates of wages.' A national headquarters was established, and national officials elected.

Wal Hannington, who was national organiser for most of the NUWM's existence, later described it: "There is no other organisation in Britain which has crammed so much intense and persistent agitation into the period from 1921 to 1936 as the NUWM."

As well as fighting for demands for real help for the unemployed and an end to the variation in the meagre relief that was available, the organisation also recognised what Marx and Engels described as capitalism's need for a "reserve army of labour". The NUWM argued that the unemployed were being used to drive down wages and conditions of those in employment.

This is exactly what the British government and the bosses were doing. This whole period was one of struggle between the working class and its organisations and the government representing capitalism and the bosses.

"The scene was of chronic poverty and human degradation in a setting of slum housing. They were scenes not unique to South Wales, but common throughout the distressed areas of the country," described South Wales miners' union leader and NUWM activist Will Paynter. The welfare state did not exist and the means-tested 'dole' (unemployment benefit) was insufficient and degrading.

The hated 'means test' was introduced in 1931 by the National Government. It required unemployed workers to sell possessions before receiving any benefit. And if there was a working member of the household, that too disqualified the applicant. These conditions drove workers into action.

One day of action against means testing in South Wales saw 300,000 march - over 10% of the Welsh population at the time! The situation was the same in the other coalfields, in the docklands of London and Liverpool, the shipbuilding areas of North East England and Glasgow, the industrial areas of the Midlands, and elsewhere.

The role of the organised working class and the trade unions was vital in the movement of the unemployed, combined with the leadership of the Communist Party.

The leadership of the Labour Party, despite being in power twice during the 1920s and 1930s, followed the lead of the Liberals and Tories and either simply ignored the pressing needs of the working class or worse, openly sided with the bosses and attacked workers living conditions.

Labour leader Ramsay MacDonald even joined a national government with the Tories, and hunger marches on his watch were met with police violence and prison for the NUWM leaders.

For example, between 1929 and 1934 the CP adopted an ultra-left policy, denouncing the Labour Party in Britain as 'social fascist'. This sectarianism placed an enormous obstacle in preventing official recognition of the NUWM by the workers' movement. Equally, the CP's political volte-face after 1934 led to class-collaborationist policies which blunted the struggle against capitalism.

Years of austerity inflicted by the Tories and the modern heirs to Labour's MacDonald and the Liberals' Lloyd George, combined with the Covid-crisis, have seen unemployment rise again, with the potential for it to get much worse.

Following the global economic crisis in 2008, the Socialist Party launched Youth Fight for Jobs, taking inspiration from the heroic and determined hunger marches and unemployed workers' activists of the NUWM in the 1920s and 1930s.

Youth Fight for Jobs recreated the Jarrow march on its 75th anniversary in 2011, as young people and socialists, with the support of trade unions, walked in the footsteps of the NUWM.

Mass unemployment, especially among young people, is back on the agenda, and so is Youth Fight for Jobs and the lessons of the NUWM.

The NUWM ranks recognised that they were not only fighting for themselves and their families, but for their communities, their class, and future generations. They saw that capitalism was the problem and poverty and unemployment would always exist as long as that system exists.

Today, we must fight for a mass political alternative to accompany the day-to-day trade union and unemployment struggles, built by working-class people and fighting for socialism - which will banish unemployment and all of capitalism's other ills, for good.