US elections: And the winner is... Wall Street!

October has seen a tightening of the US presidential race. The Republican candidate Mitt Romney has gained support by exploiting the deep disappointment with Barack Obama and the still dire state of the US economy.

This polarisation is simultaneously increasing the 'lesser evil' support for Obama as many are reluctantly prepared to vote for him, mainly as a way of stopping the right wing Republicans.

Brandon Madsen, Socialist Alternative (CWI supporters in the USA), outlines the underlying issues in this campaign and why working class people need their own party. 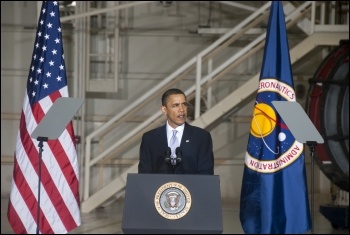 Though Election Day in the US isn't until 6 November, it is already abundantly clear who the winner of this year's presidential election will be: Wall Street and big business!

The 2012 election cycle is expected to be more awash in corporate cash than any previous election, with a projected $5.8 billion to be spent across all races.

In 2008, Barack Obama was elected to the presidency amidst a whirlwind of enthusiasm for the "hope" and "change" he had promised America, but this sentiment is now long gone.

Three and a half years into his presidency, tens of millions suffer from unemployment, foreclosures and evictions.

High levels of long-term structural unemployment have hardly changed since early 2009. The Bureau of Labor Statistics states that in February 2012, as many as 42.6% of the 23.5 million unemployed had been out of work more than six months.

According to the US Census Bureau, 49.1 million Americans live below the poverty line, and an additional 97.3 million are classified as 'low income' - ie just barely above the poverty line.

Combined, this amounts to 146.4 million US residents, or nearly half the country's total population. This number has increased by four million over the course of Obama's term in office, and the suffering is being borne disproportionately by blacks, Latinos, and women.

At the same time, the rich have continued to get massively richer under Obama. An analysis of tax returns shows that 93% of the income gains in 2010 were pocketed by the top 1%, and 37% was taken by just the top 0.1%.

Despite his promises to the contrary, Obama has continued to lead the US down the same path of right-wing corporatism, imperialism and environmental devastation as his predecessors.

He supported the Wall Street bailouts while leaving working people and the poor to fend for themselves.

His 2011 bipartisan budget deal represented the largest-ever drop in US domestic spending, with serious impacts on education, health and labour.

Obama's big promise to the labour unions was that he would get the Employee Free Choice Act passed, which would have made union organising easier. This was scrapped and forgotten almost immediately after Obama took office.

Obama promised to end the Bush-era imperialist policies in the Middle East. In reality, he has increased military spending, intensified the war in Afghanistan, bombed and invaded Libya, and carried out more drone strikes than ever before in Yemen, Pakistan and Somalia (countries the US is not even at war with).

He promised to close the Guantanamo Bay detention camp, yet it remains open today.

Despite Obama's atrocious record so far, the prospect of Republican candidate Mitt Romney winning the election is just terrifying enough to millions that they will vote for Obama anyway to keep Romney out.

However, the only reason that Romney - an out-of-touch millionaire vulture capitalist, right-wing panderer and corporate hack extraordinaire that even Republicans aren't enthusiastic about - has a chance of winning is because Obama has failed so badly at offering any solutions to the problems facing the US.

This has also helped enable the rise of right-wing populism, as embodied by trends like the Tea Party, the libertarians and Ron Paul.

The failure of the Democrats to solve the economic crisis allows for the twisted logic of bigoted scapegoating and capitalist utopianism to fill the void.

Far from preventing the worst of the right wing from gaining strength, the Democrats have opened the door for it.

In the media, however, the relatively superficial differences between the candidates are sensationalised and hyperbolically played up to help maintain the illusion of a real choice in this election.

The reality masked by this illusion is that both candidates fundamentally agree on most substantive issues facing working people.

In the midst of the worst unemployment crisis since the 1930s Great Depression, both parties agree that a real federally funded jobs programme is off the table.

With their pro-capitalist ideology comes an almost moralistic opposition to government job creation, telling workers that they have to wait for the fickle fortunes of the markets and the private sector to swing in their favour.

Both parties agree on the need to "reform" (read: begin dismantling and privatising) so-called "entitlement" programmes such as Medicare, Medicaid and Social Security in order to lower the budget deficit.

Perhaps the most striking case of agreement between the two parties was on the nature of the bank bailouts.

For all the talk of deficit reduction on both sides, when it came to throwing trillions at the big banks with no relief for homeowners or other indebted Americans, a deal was hammered out and rammed through within days.

On the fundamental issue of protecting the capitalist system at all costs, there is no substantive difference at all between the parties.

Obama has not only renewed without change Bush's Patriot Act, which legalises various forms of government spying on citizens, he has also for the first time provided legalistic justification for things like indefinite detention of anyone in the world, including US citizens, without charge or trial - things which all previous presidents had to do more surreptitiously.

In fact, the biggest difference between Obama and Bush is that Obama has been able to get away with much more right-wing policies than Bush ever could without stirring up mass anger from the social movement organisations, the unions, and left liberals in general.

It is in this sense that Obama cannot even accurately be called the "lesser evil" but, as Glen Ford of Black Agenda report put it, "the more effective evil."

That is why it is so urgently necessary to build a working class alternative to the two-party system; to give working people a political voice in this system where they currently have none.

Not only is there a yearning among voters for a viable third-party choice, as shown in multiple national opinion polls, but also the resources already exist within the labour movement to build an independent working class party.

In 2008, US labour unions gave $400 million to Obama and the Democrats, a figure which they aim to top this year.

What's more, the AFL-CIO (the largest union federation in the US) is unleashing 400,000 volunteers this year to get out the vote for Democratic candidates.

This is easily enough to build a credible third party that represents workers' interests and takes no corporate money.

Breaking through the two-party corporate stranglehold on US politics is therefore not a question of practical feasibility but of political will.

Unfortunately, so far the leaders of the unions and other social movement organisations have failed to muster this will and have remained tied to the Democratic Party with all its disastrous consequences.

While fighting to try and change this, in the meantime Socialist Alternative is calling for a vote for Green Party presidential candidate Jill Stein in the upcoming elections.

Stein supports a "Green New Deal" jobs programme, ending the wars, cancelling student debt, and calling for a single-payer healthcare system, along with many other progressive reforms.

This is not a blanket endorsement of the Green Party, which fails to see capitalism as the central problem or to base itself decisively on the working class.

Nonetheless, Jill Stein's campaign has the most potential to be a strong left campaign in the country and, in this way it points the way forward most clearly in terms of a united left break with the Democrats.

The capitalist two-party vice that the US working class and social movements have been locked into is what has blocked progress and allowed the whole political spectrum to lurch to the right over the past several decades.

It is time to break with the logic of capitalism, imperialism and austerity - and the parties pushing it. There is no better time than the present.