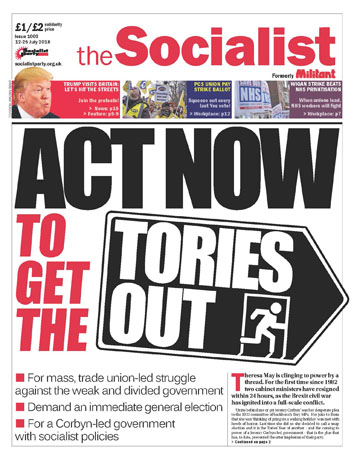 Unite policy conference in Brighton on 2-6 July was notable for delegates urging its leadership to take the initiative on the big issues facing workers: Brexit, fighting austerity, racism and the far right.

At conference, Unite's leaders responded but it must take its words into the movement in the fight to bring down this weak and hated Tory government.

That was the conclusion of the Brexit debate, reported in the previous issue of the Socialist, where delegates saw the opportunity to fight for a workers', socialist Brexit. But there is also a fear for jobs, with the executive council (EC) statement passed calling for mobilisation against any deal that threatens workers' interests.

Unite's many members in the manufacturing industry will be looking for this to be put into practice.

A motion moved by Socialist Party member Danny Hoggan on the cuts in local government was overtaken by another EC statement. The major difference between the two was the omission in the statement of a call on Labour councils to pass legal 'no-cuts' budgets.

Nevertheless, the EC statement was only carried by 207 votes to 134, reflecting a large section of the conference wanting to put further pressure on Labour councillors to defend workers from austerity.

And while a balanced statement on 'gender identity' was agreed, general secretary Len McCluskey and other leading Unite figures were criticised from the floor for signing an open letter published in the Morning Star that was one-sided in condemning violence in the current debate.

Len promised conference he would clarify the position of Unite in a reply (see 'Liberation struggle is class struggle: the fight for trans equality').

Socialist Party members played an important role in the conference in giving substance to the hunger for action for better lives.

Neil Moore, chairperson of Unite's youth committee in Ireland and a member of our sister party there, explained how young workers in the hospitality industry have been fighting back. Taking a cue from the struggles of McDonald's and TGI Fridays workers, they are getting organised and fighting greedy and bullying bosses.

Unite branches were also urged to affiliate to the Refugee Rights campaign; hopefully, Unite's EC will develop links on a national basis too.

And Mick Cotter, chair of the London Print Branch, successfully moved support for 'Los Mineros' the independent Mexican Mine and Metal Workers' Union, in the week following the victory of Lopez Obrador in that country's presidential election.

Socialist Party members in the union welcome the continuing steps forward made by Unite in policy and will continue to develop these in a fighting, socialist direction. Unite should work with other unions and those prepared to fight to oust this rotten government.