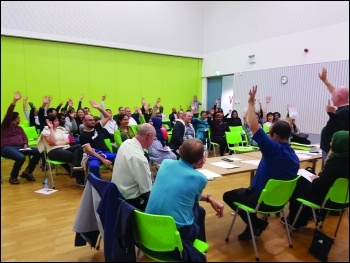 At a recent residents' meeting with the landlords of the Barking Riverside estate, they put a price on the major concessions we have wrung out of them in a bitter three-year campaign - £250,000. It was served up with a somewhat despondent apology for not listening to residents, and we were left with the distinct impression that it stung.

As well it should. Despite the overwhelming opposition of res-idents, the landlord had gone ahead and displaced perhaps as many as 350 residents' cars from the estate and imposed punitive parking restrictions.

Women, particularly black and minority ethnic women, felt vulnerable as they were forced to cross the estate at night to remote parking spaces. Those with children were faced with dragging them and shopping for miles. There was also a great lack of spaces for visiting family members.

Residents felt the injustice. They took control of their residents' association and fought back.

A lawyer advised us that we could sue for 'loss of easement' - at an initial cost of £2,400 - and would win, as the landlord had removed our rights as leaseholders. But we hesitated to take on the landlords through the courts, knowing that judges could be biased, given their class backgrounds.

Many residents refused to pay their fines. And those familiar with the skills needed to jump through legal hoops have won. But eventually, after we drew up a team of Trade Unionist and Socialist Coalition candidates to stand against our councillors - two of whom were coincidently on the crucial council planning committee - the councillors switched sides and gave us full backing against the landlord.

This public declaration, in July 2017, which was made good in the granted planning permission for 108 extra visitor spaces in August 2018, turned the tide and made the landlord realise that they must listen to us - which they have perhaps begun to do.

But we have bigger plans. More than 60 residents packed our annual general meeting (AGM) and unanimously passed a resolution calling for our residents' association to defend the right to residents' democratic control over the estate - which is written into the founding documents of the company set up to run the estate, but which the landlord wishes to overrule.

We also demanded the whip hand over the managing agents, currently appointed by the landlord.

Two days later, residents were informed that one of the managing agents - Pinnacle Places, which we singled out for criticism in our resolution - had been removed from a substantial part of the estate.

Our long term goal is residents' control over such decisions, together with public ownership of the common areas, high quality public and freehold housing and abolition of leaseholds.

And at the AGM, at which our very hard-working committee was elected unopposed, I made clear my socialist credentials and bitter opposition to privatisation that has crashed so badly on the estate.