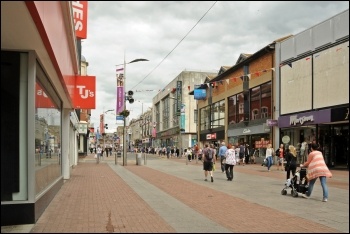 Squeezed incomes, reduced free time, transport difficulties and lower effective tax rates for online retailers have all hit the high street hard. So it was hardly surprising that Tory chancellor Phillip Hammond made a great play of being its rescuer in the recent budget, pledging £1.5 billion.

This allocated £900 million for business rates relief - tax cuts for small retailers, meaning those with a 'rateable value' under £51,000.

But it's the big chains that are responsible for the bulk of store closures and workers out of a job.

Big retailers could benefit from the rest of the sum, allocated to a 'transformation fund' for the high street. This is supposed to be used for renovations and 'small-scale transport infrastructure'. However, the Tories will not disburse this according to the needs of retail workers and local communities, but instead to suit the needs of bosses and property owners.

In contrast to this, retail workers' union Usdaw recently launched its 'Industrial Strategy for Retail'. This includes some welcome measures: a £10-an-hour minimum wage, minimum 16-hour contracts and the right to a contract reflecting regular hours worked. Also, reducing the gap between chief executive pay and ordinary workers, and measures to stop corporate tax avoidance.

The strategy supports Labour's pledge to introduce free bus travel for under-25s. It calls for removing the loophole allowing employers to avoid collective consultations when closing sites with less than 20 staff.

But it falls short of asking a central question: under whose control is the retail industry to be developed, and in whose interests?

Usdaw's 2017 conference resolved that failing retail companies should not to be allowed to sack workers and close stores, but be brought into public ownership instead. Usdaw should make this a cornerstone of its industrial strategy for retail.

Instead of handouts to private equity firms owning shopping centres, why not nationalise them, with compensation paid only on the basis of proven need?

Instead of the further corporatisation of the high street, why not allow democratically elected committees of high street workers and the local community to decide what changes they feel are necessary?

They could decide rents and rates democratically. They could decide if and how surplus retail space should be converted to provide some other use which protects jobs, like community centres. In fact, this could begin immediately where Labour-controlled local authorities own shopping centres.

Only on the basis of empowering ordinary workers to control our communities and workplaces can we avoid the fate of the 'ghost malls' and 'ghost towns' that haunt the US.