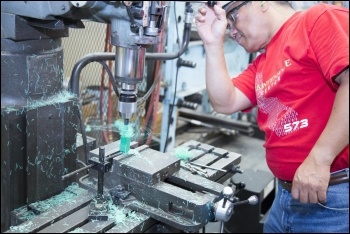 A plastic machinist, photo by Keith Hayes   (Click to enlarge)

Tarsem Singh, an employee of 23 years for Nylacast Engineering Solutions, plastic engineers in Leicester, died in April 2016 after an industrial accident. He was hit by the end cap of a pressurised moulding machine travelling at a speed of up to 80mph.

A former employee has testified that he had been hit in the hand by an end cap in a previous incident. A safety expert has said the machine had not been properly risk-assessed and was an accident waiting to happen.

The case was due to come back to court in December but a worker for Nylacast contacted the Socialist when the workers were threatened by the company to keep their mouths shut.

He told us that a statement was read out to the workers on behalf of the chief executive saying that the company was going to plead guilty in the court case so that Tarsem's family would get a pay-out, but that Nylacast was in no way guilty and that any worker caught saying otherwise would be disciplined.

This worker went on to say that the equipment at the company is falling apart. He said that machinery had been bought in 2000 and never replaced - that not only was Tarsem's death an avoidable accident but one that was waiting to happen again.

According to him, there used to be two health and safety workers on site. But after one left in December 2017 he has not been replaced. All this from a company with a turnover of £32.4 million

Our source says that workers are furious at the death of their colleague and the threats from above. He described company bosses that are incredibly anti-union and workers as being in fear of losing their jobs.

But when two metal workers died at work in Cadiz, southern Spain, earlier this year, a general strike of thousands of metal workers across the sector paralysed the industry and held the bosses to account.

The strike made it clear that these deaths were not just accidents but a direct result of the high turnover of staff due to precarious contracts, the intense pace of work and the lack of security - all measures taken with the aim of saving money.

It is a scandal that globally and in the UK, the sixth richest economy in the world, that workers' lives are at risk. This is the reality of a capitalist system run for the wealth of a tiny privileged elite.

Workers organised in their workplaces can fight together in trade unions against callous exploitation and for a socialist world where profit does not stand in the way of health and safety and there is no price tag on a worker's life.

Trade unionists locally are discussing the possibility of organising a protest at the next court date.