Editorial of the Socialist, issue 1025 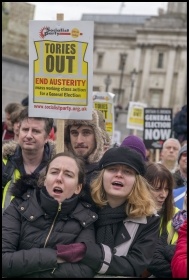 The Tories are at each other's throats - now let's get them out! Theresa May's Brexit deal is finally going to be voted on in parliament, just six weeks before Brexit is meant to take place.

May's hopes for her deal lie in tatters. She had hoped that by being seen to implement Brexit she could hold the Tory party together and win popular support among the millions who voted for Brexit.

At the same time, she hoped to implement a deal which would be in the interests of the capitalist class by remaining aligned to the EU's regulatory framework and neoliberal rules.

And it is true that, while the majority of big business would prefer a deal that was closer to the EU, they could certainly live with what May is proposing.

First, though, May would have to get it passed. Even those commentators who are most optimistic about her chances predict she will lose the vote - the biggest parliamentary rebellion in the post-war era.

What May will do after that is uncertain. The scale of defeat could force her to resign, but it is also possible that she will try and cobble together a 'new' deal and return to parliament, hoping for a different result. The moving back of the deadline - by extending Article 50 - is also possible.

While the Tories tear themselves apart over Brexit, however, millions of working-class people continue to suffer as a result of this government's brutal pro-big business policies.

There are now more than 4.5 million children in Britain whose parents cannot afford to feed them properly.

It was rage at this endless misery for the majority - while a few at the top line their pockets - which was the root cause of the 2016 Brexit referendum result.

The Tories are a capitalist party, and there is no Tory proposal on Brexit - or anything else - which is in the interests of the working and middle-class majority.

The priority for the workers' movement needs to be to build a movement to kick this incredibly weak and divided party out of government and to bring a Jeremy Corbyn-led Labour government with socialist policies to power.

Corbyn needs to make clear that any Labour MPs who vote for May's deal, thereby helping to keep the Tories in power, should immediately have the 'whip' - their right to be Labour MPs - withdrawn.

At this stage, however, the majority of the pro-capitalist wing of the Labour Party, the Blairites, frightened of being associated with a lame-duck prime minister and her deal, are continuing to focus their efforts on demands for a second referendum; a so-called 'peoples' vote'.

This is a very risky option for the capitalist class. It would be highly divisive and would risk a dramatic further undermining of the authority of the capitalist establishment which would be seen to have blatantly changed the rules to suit its own interests.

Nor is it even clear if parliament would be capable of agreeing what the question or questions would be! Nonetheless, if the parliamentary deadlock remains, more serious moves towards a referendum cannot be ruled out.

Whatever stance the Blairite Labour MPs take, however, it is clear that they will be guided not by what is in the best interests of working-class people in Britain or internationally, but only by how best they can serve the capitalist class. 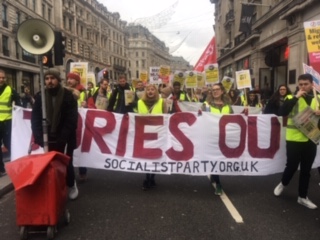 The trade unions and Jeremy Corbyn should be organising mass protest action to call for a general election, which would be a real peoples' vote.

Last Saturday's demonstration for a general election, called by the People's Assembly, was a modest size, but this reflects the lack of a clear lead from the top, not the lack of a burning anger against the Tory government.

Parliamentary tactics about when and how to call no-confidence votes are secondary compared to building a movement on the streets to fight for one.

This should be linked to a clear socialist programme, including on the question of Brexit.

Corbyn's Brexit 'red lines' should be opposition to all neoliberal, pro-capitalist rules. He should demand negotiations are reopened on the basis of opposing all EU single market and customs union rules - like those on state aid, 'market liberalisation', or the posted workers directive - which go against the interests of the working class.

He would then be able to make a call for international solidarity with workers across Europe. This would mean seeking to build a European-wide campaign of socialists and workers' organisations to use the talks to tear up the current pro-big business rules of the EU bosses' club.

Backed by popular support in Britain, and with solidarity from workers across Europe, he would be in a far stronger negotiating position than May.

In addition, a Corbyn-led government would be able to use a programme of nationalisation to take the ability to inflict job losses, closures or reductions in pay and conditions out of the hands of any corporations that move to punish the working class under the guise of Brexit difficulties.

This approach would be in the interests of the working and middle-class majority. For the capitalist class, however, a Corbyn-led government with socialist policies and mass popular support is an even worse nightmare than the mess it is in over Brexit.

That is why, while Corbyn is calling for a general election, the Labour right is either not doing it at all or doing it in such a token way as to make clear it has no intention of fighting for one.

Corbyn needs to immediately put the workers' movement on a war footing to fight for a general election.

The 'trigger ballot' process urgently needs to be opened which allows local Labour parties to select new candidates for a forthcoming general election.

An emergency labour movement conference should be called, open to all anti-austerity forces, including the Socialist Party and non-Labour affiliated unions like the RMT, to discuss how to urgently recreate Labour on democratic, socialist lines.

That would need to include discussion not just on how to win a general election, but also how to prevent the inevitable capitalist attempts to sabotage a Jeremy Corbyn-led government.

Key points would include the nationalisation of the banks and major monopolies under democratic, working-class control and management, in order to pave the way for a socialist plan of production to meet the needs of all.

This should be linked with a new collaboration of the peoples of Europe on a socialist basis - based on working-class solidarity across borders.

This version of this article was first posted on the Socialist Party website on 15 January 2019 and may vary slightly from the version subsequently printed in The Socialist.