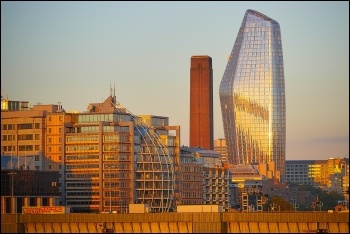 Land and property is becoming more lucrative than diamonds in London, photo fietzfotos/CC   (Click to enlarge)

In 2010, George Osborne pushed his emergency budget through parliament.

He swung the big axe and councils around the country wielded a thousand little axes. Millions of pounds were cut from local budgets - millions of people suffered. A huge remodelling of local government was undertaken, with government grants cut, coupled with a new, intensified emphasis on outsourcing and privatisation.

Soon after the cuts budget of 2010, the Tories pushed through the Localism Act of 2011. These changes go together like a pair.

Just one example of blurring the lines between local government and business interests was the introduction of the rules on special dispensation.

Before 2011, if a vote was taken - say on school meals being privatised - and if you were a councillor sitting on the committee that was voting on the planned privatisation, and if your husband ran a catering company that may be interested in bidding for the franchise, you were compelled to declare why you weren't voting on this particular issue.

Indeed, you were compelled to leave the room and publicly register your interests to explain why you couldn't vote.

A debate erupted in the local community as to why councillors failed to specifically say why they weren't voting. What were they hiding? Their failure to declare their specific interests rather than the catch all of special dispensation was not illegal according to the Localism Act, but it made the local community ask: "If you have nothing to hide why not declare your interests?"

A similar story emerged in November 2018, and was reported in the Waltham Forest Guardian. A cabinet member who is a known multi-property landlord failed to leave the room or declare his interest when the Landlord Licensing Scheme was being discussed.

An online community blogger has written about numerous councillors failing to keep the online register of councillor interests up to date. He cited some who had partners who ran letting agents and others that owned houses they failed to declare.

Of course, these 'omissions' are always described as 'oversights'. But it makes the councillor register of interests read more like a historical document rather than something that compels public representatives to be open and transparent about their or their family members' business interests. Compare the treatment of these councillors to benefit claimants who fail to declare anything.

Land and property is becoming more lucrative than diamonds in London. This raises the suspicion that those who own it stand to prosper from any so-called regeneration or improvement schemes - which councillors sanction in committees and at local planning committees.

As I explained to the local paper:

"We do not believe that councillors or MPs should be mass landlords as we think, on a general and moral basis, there is a potential conflict of interest there."