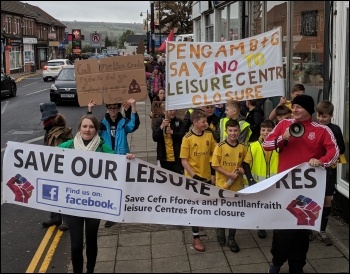 A battle is raging inside and outside the Labour Party in Caerphilly County Borough (mainly covering Islwyn and Caerphilly constituencies) against the cuts that the Labour-run council is inflicting on public services in the borough.

In particular, there has been outrage that the meals on wheels service is being effectively abolished, while another quarter of a million pounds is being spent on the ex-chief executive.

Islwyn Constituency Labour Party (CLP) has called on the council to set a no-cuts budget, drawing on reserves and fighting the Tory government for funding. Even the deputy leader has condemned the Welsh Labour government for underfunding the council.

But the right-wing councillors are fighting back and digging their heels in to insist on carrying out these cuts. A member of Islwyn CLP reports:

"When the resolution of a no-cuts budget was unanimously passed at the November Islwyn Constituency Labour Party meeting, there was hope that Labour-run councils across the UK would now stand up and fight against the austerity policy of this Tory government and force them into a position where they would have to provide the appropriate level of funding to local government.

"At the January Islwyn CLP all-members meeting, controversial Caerphilly council leader David Poole categorically ruled this out as an option and stated, when asked if he would request that officers assemble a no-cuts budget, that his answer was a resounding 'no!'"

"Other councillors, who had refused to attend the November all-members meeting where the motion on the budget was moved, turned up - this time en masse - with one Abercarn councillor shouting 'it's illegal, do you want us sending taxis around giving out redundancy notices!'

"But isn't this exactly what is happening anyway, with various services being cut? Surely the only option left is to adopt a no-cuts budget which we can confirm is not illegal. It has been proposed throughout the country by various unions who are standing up for the workers they represent. When will the councillors of Caerphilly county stand up for the people they represent?"

Corbyn-supporting Labour Party members in Islwyn are demanding that the councillors support and implement the CLP's call for a no-cuts budget or stand aside at the next election. These members are prepared to deselect councillors that are flouting CLP policy and trying to force through the cuts.

And it may be necessary for anti-cuts candidates to stand against existing councillors if they are not deselected as Labour candidates. The threat of deselection or council election defeat may yet force councillors to step back from further cuts.