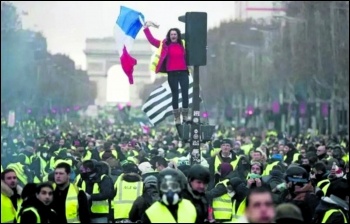 "The year Jupiter plunged from Mount Olympus." That's how news site France24 summed up 'president of the rich' Emmanuel Macron's 2018, after the French presidency was fundamentally shaken by the eruption of the 'gilets jaunes' (yellow vests) movement.

Macron started 2019 with an insult to the gilets jaunes and people of France in his new year's address.

Rejecting outright mass calls for his resignation, he went on the offensive against what he termed a "hateful mob" and doubled down on his anti-worker counter-reforms.

Despite this message, eight weeks after the first gilets jaunes protests, 'act nine' of the movement unfolded across France on Saturday 12 January. After a slowdown over Christmas, it seems the movement is back in full swing.

Saturday 5 January saw tens of thousands out in the streets. Act nine the next week saw official estimates of 84,000 out across France - most likely higher.

Since then Macron has made a new bid to rein in the movement. This time he has penned a 2,348-word 'open letter' in the French press to the people of France, proposing a two-month national debate about the country's future direction!

This comes after his first attempt failed to quell the uprising below him. A €10 billion package including a minimum wage increase - and scrapping the fuel tax which provoked the movement in the first place - rightly emboldened the gilets jaunes.

Published on Monday 14 January, the letter's questions include "quelles sont les économies qui vous semblent prioritaires à faire?" - what are the 'savings' (cuts) that you think are priorities! Macron continues to expose himself for what he is - out of touch and totally committed to the interests of the French capitalist class, which is desperate to push on with its austerity programme.

One of the central weaknesses of the gilets jaunes movement - which raises questions over its future - is its lack as yet of formal organisation and democratic structures.

As a spontaneous movement, the gilets jaunes have demonstrated the potential of mass action. But how long this can last without a strategy and determined, accountable leadership is an open question.

Gauche Révolutionnaire, the Socialist Party's French sister organisation, calls for general assemblies in every workplace, neighbourhood, school and university to discuss just this.

We need a strategy for building the movement against Macron, and a political alternative to replace his government.

We argue that the next step in escalating the struggle against Macron needs to be the entry of the organised working class - the trade unions - into the battle, through mobilisations and strike actions.

The trade union leadership should call a nationally coordinated day of strike action to shut down the country and pave the way for further action. This would start to pose the key question: who really runs society?

In his New Year's speech, Macron attempted to pass the buck. He argued this anger had been building from long before his presidency.

Macron is right! That's why we don't just want to get rid of him, but the whole system which has created an untenable situation for millions of workers and youth in France - the system of capitalism.

We fight to replace it with socialism - a system in which society's wealth and resources are publicly owned and democratically planned to provide for all.

It is on this basis that we must fight to mobilise the mass of French society - led by the working class - to kick out Macron and to fight for a better, socialist world.