'Tories out' demo lively - but opportunity for mass mobilisation missed 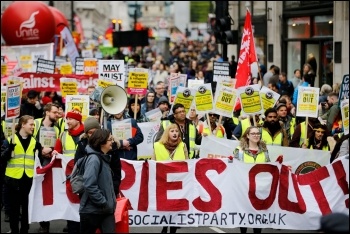 The People's Assembly demonstration in central London on 12 January culminated in front of a great big banner: "General Election Now!"

This bloc made up the liveliest, most determined, and most yellow vested contingent on the march. Our chants of "Tories out - Corbyn in" and "what we need is socialism" were taken up by much of the crowd.

At the end rally in Trafalgar Square, Unite the union assistant general secretary Steve Turner said: "Get all the bastards out of power! Get a progressive socialist government!"

John McDonnell, Labour's shadow chancellor, brought "a message of solidarity and anti-austerity" from Jeremy Corbyn, including "we stand ready to take power!" John said that the greed of the bankers had caused the crisis for working people. "5,000 people will sleep rough tonight... the Tories with austerity are tearing apart the social fabric."

He listed examples in welfare, health and education. "Proud people are standing up and saying 'we won't take it anymore'." He promised a government under Jeremy Corbyn "will end austerity, invest in society... Make the rich pay their taxes!" He ended, "Solidarity! We will win!"

Among other speakers were two organisers of the 'gilets jaunes' (yellow vests) movement who brought solidarity from France.

The spirited march, down Regent's Street and Haymarket, attracted attention and applause from shoppers and tourists.

Indeed, a noticeable feature of the march was the lack of any large trade union contingents - evidence of a real failure on the part of the trade union leadership to organise the fight to kick out the government - even when the Tories are on their knees.

Those I asked agreed our trade unions should be visibly campaigning nationally at the front of the movement to oust the Tories instead of subcontracting the business to the People's Assembly.