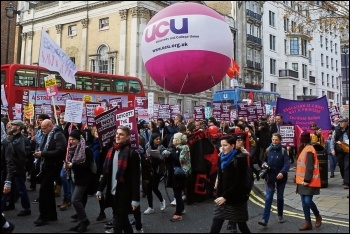 University and College Union members on the march, photo by Duncan/CC   (Click to enlarge)

University and College Union (UCU) general secretary Sally Hunt has resigned her position on health grounds. Socialist Party members have had criticisms of her leadership, and we stand by those criticisms, but of course we are saddened she has been forced to resign and wish her the very best in the future.

Unfortunately, an emergency meeting of the union's national executive committee voted by 26 to 21 to hold the election for Sally Hunt's replacement straight away.

This was done in full knowledge that the elected Democracy Commission will be putting forward rule changes to UCU's Congress this year. These will allow members to recall a general secretary and force an early election.

The left on the national executive committee opposed an early election because the new general secretary will be in place and their contract signed before congress can take a view on the Democracy Commission recommendations.

No doubt at our congress the right wing will again disgracefully argue that the democratic right of recall constitutes an attack on the employment terms and conditions of the general secretary! Last year they walked out and shut down our congress. Will they try to frustrate the will of the sovereign body of our union again this year?

Unelected senior official Matt Waddup has announced his candidacy for general secretary. Disgracefully, he says he doesn't agree with the Democracy Commission's recommendations and doesn't want to be subject to the recall process.

Who is he to challenge an elected body created by our democratic congress? He's never even worked in education!

Worse still, he was key to the stitch up that withdrew the threat of further strikes in the USS pension dispute last year. Before then, all of the leverage was with us after 14 days of magnificent strike action.

Now, the employers are attempting to impose contribution increases on our members, despite the Joint Expert Panel report demonstrating our pension scheme is healthy. What should have been a total victory has been sabotaged.

Unfortunately, left candidates in the national executive committee elections - which just closed - did not concretely raise the demands for recall put forward by the Democracy Commission. Undoubtedly that means we are in a weaker position than we would have been in responding to these developments.

It's essential that the left and the rank and file in the union unite around one general secretary candidate, not just to defeat Waddup, but to continue the fight to democratise our union and to build a strategy to overcome the Tory anti-union laws and defend post-16 education against cuts, marketisation and privatisation.

The announcement in recent days that all staff at the University of Surrey have been offered voluntary redundancy shows the severity of the attacks we face.

UCU Left should call an emergency conference, alongside groups like the Branch Solidarity Network and UCU Rank and File that grew out of the pension strike, to discuss these developments and our response.

We need to unite around a candidate who will:

As we go to press, the results of the national executive committee elections are still to be announced, which will have a bearing on the general secretary election.