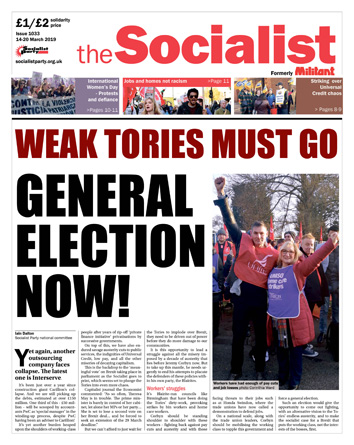 Only two months since coming to power, President Jair Bolsonaro has confirmed all the worst expectations in relation to his government. During the recent annual Brazil Carnival many revellers protested against his right-wing agenda. Bolsonaro hit back by tweeting a pornographic video clip from the Sao Paulo carnival, apparently to expose 'degenerate leftists'. However, this has backfired spectacularly on the president leading to his widespread ridicule. Andre Ferrari, LSR (CWI in Brazil) looks at the stark contradictions in Bolsonaro's government and the instability to the capitalist system these are generating.

Bolsonaro has waged war on workers, the poor, women, black, indigenous and LGBT+ people. They are taking rights away, stamping on democratic freedoms, increasing violence, and handing over the country's resources to the multinationals, worsening the conditions of the vast majority.

The government's pensions counter-reform is the peak of this reactionary agenda. The approval of this law is the government's most important immediate and strategic aim.

Previous president Michel Temer did not manage to get that far. He was contained by the contradictions within his corrupt government of coup-plotters, but also by the pressure of the masses, for example through the April 2017 general strike.

The situation today is not the same. The wealthy now have at their disposal a far-right government which is radically neoliberal and which has won an electoral mandate and built a certain social base of support.

To defeat this government we must understand where its social base comes from, examine its contradictions and work to expose them.

It is true that the electoral victory of Bolsonaro was marked by manoeuvres and repression, including the imprisonment of Lula da Silva (the former president), the candidate who was leading the polls and the main opposition to Bolsonaro.

However, this doesn't explain everything. The social layer which is most consolidated in support of Bolsonaro is made up of mostly the reactionary elements of the middle classes, fed by the politics of hatred, violence and reactionary values - elitist, racist, sexist, LGBT-phobic, and so on.

However, the victory of Bolsonaro came about as a result of the broadening of his base of support, especially among sections of the poor population understandably dissatisfied with the situation in the country and who were attracted by the apparently 'anti-system' profile of Bolsonaro.

The fall of the PSDB (traditional capitalist party) in the midst of the political crisis, made worse by its participation in the Temer government, allowed a reorganisation of the right wing on a more extremist basis. The political space of the PSDB was taken by Bolsonaro.

The same reorganisation did not take place on the left which remained under the hegemony of Lula and the PT (so-called Workers' Party) with its legacy of class collaboration and total adaptation to the capitalist political system.

The rhetoric of "change" with an anti-PT, anti-left emphasis, against corruption and defending an "iron fist" on public security, allowed Bolsonaro's support to grow and him to win the elections.

However, Bolsonaro did not wage his campaign based on an ultra-neoliberal agenda. Datafolha polls indicate that 60% of the population are against privatisation and 57% reject the labour reform, despite the campaign of lies that it will create jobs. As well as this, 66% disagree with the prioritisation of relations with the USA. 71% support political discussion in schools and 54% support sex education.

Bolsonaro's victory provoked much confusion and a retreat in consciousness but this is not irreversible.

Bolsonaro was not initially the 'Plan A' of the most conscious sections of the Brazilian ruling class - who have a more strategic vision and would prefer a less unstable and unpredictable candidate.

However, none of the 'sober' bourgeois candidates was able to get 57 million votes like Bolsonaro. The ruling class was able to adapt to this situation and try to take as much advantage as possible.

The expectations and illusions in Bolsonaro will clash with reality. The rhythm of this process will depend on various political, economic and social factors, but mostly on the ability of the organised workers' movement and all the oppressed to take the initiative.

This includes the reorganisation of the left on a more combative, radical, anti-system basis - rooted in the working class.

As a political phenomenon which arose without an organic link to bourgeois Brazilian politics, 'Bolsonaroism' brings great instability and risks.

This was clear during the government's first big crisis which led to the fall of minister Gustavo Bebianno - who coordinated Bolsonaro's election campaign and was the fourth most leading figure in government - after it emerged that Bebianno had siphoned money from a publicly financed electoral fund.

The firing of Bebianno produced friction in the government's parliamentary base of support. On the eve of the announcement of the pension reform (which needs a two-thirds majority) Bolsonaro suffered his first defeat in Congress.

The government decree which restricts the 'law of access to information' was defeated, in a clear sign that the life of the government will not be so calm as it seemed.

With Bolsonaro as president, a new layer of corrupt figures and people linked to the world of crime and militias rose to power. The new instability and explosiveness that this provokes will be seen more sharply in the future.

Beyond the careerists and proto-fascist figures, the government is also made up of other groupings, in a mixture of forces which are not always compatible with each other.

There is a more ideological wing made up of the disciples of the ex-astrologist Olavo de Carvalho and right-wing religious fundamentalists. The minister for the environment, Ricardo Salles, is a mixture of right-wing ideologue and pragmatist in the service of profiteers who destroy the environment. Alongside him is the minister for agriculture Tereza Cristina, chosen by agro-business bosses.

These elements are very dangerous and are pushing forward attacks on women's rights, LGBT+ people, black people, indigenous people, peasants, students and teachers. As well as this, there's the alignment of the government with the attacks of imperialism against Venezuela.

The most conscious representatives of big finance capital work through Paulo Guedes, the super-minister of finance. He is the key figure in the government - the bridge between the government and the banks and the guarantee that, despite the peculiarities, the Bolsonaro government can be trustworthy and useful for the big capitalists.

If Guedes is not able to deliver what he promised to big capital, starting with the pension reform, this could lead to a new level of crisis and instability in the government.

The role of Sergio Moro as super-minister for justice and public security is also vital for the government and interests of the ruling class.

The illusions that a big part of the population have in Sergio Moro as a judge who fought against corruption and crime - a totally false idea - helps to create expectations in the Bolsonaro government.

Moro, by ignoring the corruption scandals in the government and Bolsonaro family, shows that these illusions cannot last long.

However, despite this, Moro has a significant task in relation to public security, which was a key element in Bolsonaro's campaign and a grave social problem.

The so-called "anti-crime" package defended by Moro would represent a big step backwards. It would, in line with Bolsonaro's campaign promise to give police a licence to kill and increase the shooting of poor black youth.

The pretext of the fight against crime and organised crime can allow the government to militarise society even more and worsen the criminalisation of poverty and social movements.

Together with Paulo Guedes and Sergio Moro, the other element which gives a more solid base to the government is the wing of military chiefs who are gathered around Bolsonaro.

There are at least 46 soldiers in at least 21 different parts of Bolsonaro's government. The hardcore of this military wing is made up of generals who work directly from the Presidential palace. We must now add general Floriano Peixoto Neto who replaced Bebianno as general secretary to the presidency.

The most important and immediate task for the organised working class and all oppressed sectors is to organise resistance to the attacks of the government and its allies in the state and local governments.

However, this task can only be carried out effectively if it is linked to the building of a left alternative to the crisis.

In the event of a deeper crisis for the government, which could also result from working-class resistance, we have already seen how the ruling class can build new alternatives within the reactionary camp, qualitatively increasing the Bonapartist and repressive elements which already exist in the situation.

Unity in action against the government must be complemented by the construction of a new radical, combative, anti-capitalist and socialist left, built from below.