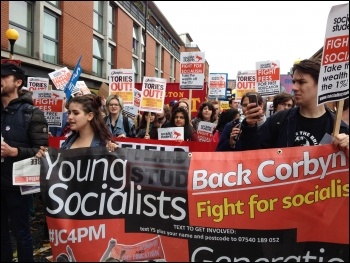 "What's important," Sophie, year eight, told our Rhondda Young Socialists meeting, "is to tell people how socialists like us are coming together to target capitalism and its politicians."

Likewise Mason, year six, said she'd spotted the 'socialist change, not climate change' posters we'd put up around their school and been eager to take part. When I asked Sophie whether she'd been on any of the protests down in Cardiff, she replied with a gleam in her eye, "not yet".

Mason said the situation was about more than climate change: the council had wasted money building a super-school.

Speaker Finley Toomey-Langford had put up posters in his sixth-form common room. He'd never expected to end up speaking to people so much younger than himself - and yet, their passion and commitment were unmistakable.

"What this shows", said Finley, "is that the fighting traditions of the Rhondda are still alive in the younger generation. What we need to explain is the importance of collectivising" - in other words, the need to organise and build for mass action.

Sophie and Mason exchanged a fist bump when the meeting ended. It was clear they were proud of themselves. They will be leafletting their school canteen and working to get people to the next meeting.

Finley will be campaigning at his school - as well as working to get people down to the next climate change youth strike on 21 June.

Rhondda Young Socialists are on their way.