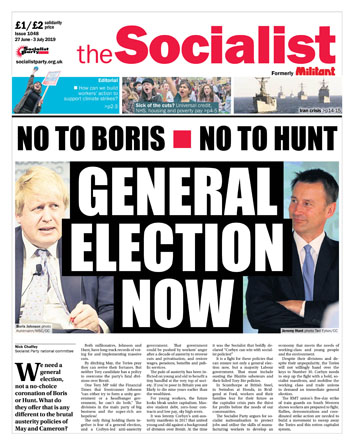 Editorial of the Socialist, issue 1048

Since February, every month this year there has been a big protest of young people outside Parliament and in town centres around the country. The "youth strikes 4 climate" have brought thousands of young teenagers (and sometimes even younger) out of the classroom and on to the streets. In an expression of their lack of confidence in the government to act, many of the young people involved are discussing what needs to be done to win effective change.

In April, Greta Thunberg, the Swedish teenager who first sparked off the youth strikes, called for a general strike for the climate.

Socialist Students and the Socialist Party have enthusiastically got stuck into the climate strikes. From the very start we have explained the importance of students appealing to workers in the workplaces and trade unions.

Our leaflets said: "By linking up with the trade unions, young people could build a potentially colossal movement against climate change. Mass collective working-class action - specifically, strike action, has the power to not just shut down the roads but to shut down the whole country. That poses the question then of who should run it. Not the Tories and their fat cat bosses."

We went on to explain that it is working people who keep our society going day to day - the teachers in our schools and colleges, the bus and train drivers who drive our transport, and working people who create all the goods and services in our society. It is the working class which has the power to grind all of society to a halt.

We said "the trade unions - which have 6 million members in Britain alone - could be key in escalating and building the struggle against climate change and environmental destruction.

"We call on the trade union movement, as well as the Labour leadership of Jeremy Corbyn and John McDonnell, to get behind this youth movement, build links and offer every assistance possible."

We produced model resolutions to raise the issue in the workplaces and unions.

Since then the idea of a general strike has caught hold among layers of activists. At least two dates are now being posed in September - 20th and 27th - for an "earth strike - a general strike for the climate".

It is very positive that young people are talking about workers taking strike action, using the language of mass class struggle. It points in the direction of the force in society that has the power to decisively change things - the organised working class. It is an instinctive appeal by young people to the working class and their organisations to act.

The day of action in September could be the biggest protests yet. Many trade unionists are discussing what can be done, such as the Bakers Union, and in the education unions the UCU and NEU. For any action to be effective it will need to be discussed and organised by union members.

School and college students should ask local trade unions and trades councils to back the September protests and discuss with them whether workers can join them on the day. The idea could take off of protests being held at the front of their workplace at lunchtime or the start or end of the day. There could be big attendances at the city and town centre protests, with workers taking a day off or ringing in sick. Union leaders at a local and national level should be called on to speak at the demonstrations.

There have been generalised strike actions in recent history in many European countries. Following the world economic crisis of 2008, and the attempt of the ruling classes world-wide to force the working class to pay through savage austerity, many general strikes took place in southern Europe and especially in Greece where the working class heroically undertook more than 30 general strikes. This year began with the biggest general strike ever in India, with 200 million workers on strike.

But in Britain, there hasn't been generalised co-ordinated strike action since 2011, when over two million public sector workers struck in defence of their pensions. With that background, and with the role of many of the trade union leaders having been to put a brake on strike action, for such action to take place in Britain would be a huge development and would take a more concerted and sustained effort to turn to the workplaces and unions.

We raise this because we want to see this day of action in September as a step in that direction. This is one reason why we have raised the importance of students getting organised - to collectively discuss next steps and what to demand, and to help build. So we have called for, and helped students start to set up, school student unions.

The youth strikes taking place now are the biggest protests of young people since the student demonstrations in the winter of 2010 against tuition fee increases. At that time they fed into the trade unions taking action against austerity, which culminated in the 2011 movement. The Socialist Party played an important part in helping that to happen, mapping out and fighting for preparatory steps.

On that demonstration we called for it to be used as a stepping stone towards a one day public sector strike. We fought for this idea in trade unions, and, following a day of action by PCS and education unions in June, on November 30th 2011 two million public sector workers took strike action.

That itself should have been a step towards a 24-hour general strike. We, along with many trade union members and left leaders, fought again, including organising 1,000 trade union activists to march to the TUC congress in 2012, where a resolution was passed to consider a one-day general strike. At that stage, the capitulation of right-wing trade union leaders meant that this next step was never taken.

However, after ten years of austerity, vast numbers of working-class people are at breaking point. In recent months there has been an increase in localised strike action in several different sectors, as has been illustrated in the pages of the Socialist. Another recession is looming. The Tory party, meant to be the representatives of big business, is in complete crisis.

The young people campaigning against climate change, appealing consistently to workers and putting demands on trade union leaders, could help to build an unstoppable movement from below. If this movement is armed with the socialist demands necessary to end austerity and climate change, it is much more likely that the potential to link up young people and organised workers will be realised.

This is why, on the London protests, we have used our red sound system to hold open-air street meetings or 'assemblies' where hundreds of young people have listened, spoken, disagreed with each other, and argued out different ideas, including socialist ideas. We have explained the need for socialist policies and called to kick out the Tories as the first step in fighting climate change.

Such a movement would involve striving to win socialist fighters in the leadership of unions.

However, power is not necessarily posed by a one-day general strike, instead it is more a testing out of strength. Although given its rarity in Britain, even a one-day strike could have shattering consequences for a government. A one-day general strike could bring down the hated Tories, for example, and propel a Corbyn-led Labour government to power. It could also have a potentially transformative effect on the battle against the right-wing Blairites and for socialist policies in Labour Party.

And a movement capable of achieving that, would then have a vital role to play in providing the counter-pressure to the capitalist interests that inevitably will be mobilised, including their Blairite representatives inside the Labour Party, to strangle and prevent such a government carrying out the socialist policies necessary to end austerity, combat climate change and ensure a decent, environmentally-sustainable, life for all.