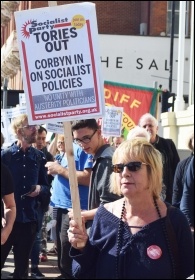 Kick out the Tory hypocrites

Another terrible attack in London. Two people stabbed to death, three more injured, and the attacker shot dead by the police. The Socialist Party completely condemns this horrific attack.

It took place on London Bridge, following the attack in the same area in 2017 in which eight people were killed.

In that year there were four terrorist attacks in London: at Westminster, on the Finsbury Park mosque and a partially-exploded bomb on the tube, as well as the London Bridge attack. In that year there was also the horrific Manchester atrocity.

This time it would appear to have been more targeted rather than an indiscriminate attack on the public. However, as is always the case, it is ordinary people who suffer, and it is ordinary members of the public and emergency service workers who showed great bravery in confronting the attacker and dealing with the situation.

The human solidarity expressed from people across London, the country and worldwide has nothing in common with the hypocritical reaction of Boris Johnson and other Tory government ministers.

Their policies create the conditions for such horrific acts and then they try to make political capital from them.

The political parties officially suspended campaigning in the general election but that didn't prevent Boris Johnson and the other parties of big business from attempting to use the attack to their advantage. Just a few short hours after the attack, every party pledged to increase police numbers.

The attacker was out of prison on licence following a conviction for terrorism. Boris Johnson tried to play the hard man saying he had "long argued that it is a mistake to allow serious and violent criminals to come out of prison early".

Chris Phillips, a former head of the UK National Counter Terrorism Security Office, has launched an attack on the criminal justice system, which he said needs to "look at itself".

But it is this Tory government, and the Tory-LibDem alliance before that, that 'talks tough' but has presided over cuts to every aspect of their justice system.

It's not just cuts of 20,000 police. The probation service was privatised and that has been such a disaster that even the Tories recognise it needs to be renationalised.

Cuts to the Ministry of Justice of 40% of its funding, among the deepest to government departments, have led to big delays and the closures of courts.

Conditions in prisons are catastrophic with overcrowding, 9,000 cuts in prison officers, and cuts to rehabilitation.

Incidences of self-harm in prisons have increased over 70% and attacks on staff have escalated.

Local councils, including Labour councils, have passed on Tory cuts to young offenders services and all youth services.

Working class people's access to justice has been devastated by the cut of £1 billion from legal aid.

The big business politicians may praise the firefighters and ambulance workers after attacks and disasters but when he was London mayor, Boris Johnson cut £29 million from the fire service in London in 2013, including the loss of ten fire stations, 14 fire engines and 552 firefighters.

In 2011 the Tory-LibDem coalition cuts meant 890 job cuts were proposed in London's ambulance service. Not to mention the meltdown in the NHS caused by cuts and privatisation, with a 100,000 national jobs shortage and £6 billion backlog for repairs and maintenance - and 78% of NHS staff feeling under too much pressure.

The Tories and the right-wing of Labour try to attack Corbyn over 'security' but it is the murderous foreign policy of Tory and Blair governments alike, especially in the Middle East, including in Iraq and Afghanistan, that have created a nightmare for the people of that region and have increased the likelihood of abhorrent terrorist attacks across the world, including in Britain. Those wars were opposed by the majority of the population, including Jeremy Corbyn.

In two weeks' time there is an opportunity to boot out these Tory hypocrites, the austerity pro-war capitalist politicians. But we must be aware that the majority of Labour MPs who get elected in December also have supported war and austerity, and are opposed to the socialist-leaning measures in Corbyn's programme.

We must resist any attempts to divide the working class along racist lines; and prepare for mass struggle to win the popular policies in Corbyn's manifesto.

Fight to end austerity and for a socialist world to end the wars, poverty, racism and terrorism that are created by capitalism.

This version of this article was first posted on the Socialist Party website on 30 November 2019 and may vary slightly from the version subsequently printed in The Socialist.