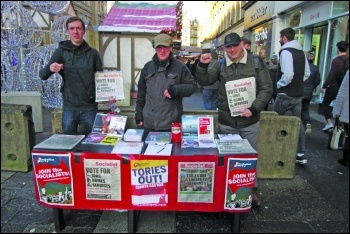 "Time socialism was back on the agenda"

Since the general election was called, Swansea Branch has been organising at least three city centre and one campus campaign stalls a week, usually comprised of a main Socialist Party campaign stall and a separate Young Socialist stall nearby.

Saturday 30 November was very much a successful day for us with 26 papers sold and £20 raised in fighting fund donations. There was a lot less hostility, a lot more openness and positivity.

While it is clear that there is still a silent majority who aren't talking about the election or their intentions, the polarisation has meant that those who care the most, either way, are more vocal.

Over the course of the two-hour stall we met:

An older woman from Coventry fondly remembering the legacy of Militant (forerunner of the Socialist Party) in the city; praising Dave Nellist as a worker's MP on a worker's wage, and Rob Windsor, "the best councillor I've ever had!".

A young, homeless bloke who was initially hostile to us. The previous week I had given him a paper and some leaflets, and after a long chat he said that he felt there was no reason for him to care about politics. This time he told me he had gone to the shelter to register to vote!

And finally, a working-class couple, both on Universal Credit, who gave us a raised fist salute and said it was, "time socialism was back on the agenda!"

There was also a steady stream of people concerned about the future of the NHS and education under the Tories, and the legacy of a decade of austerity.

It felt like a decidedly different stall to those previously, perhaps a reaction to the barefaced media smears against Corbyn, and the announcement of the Tory lead being halved in the latest major polls. It will be interesting to see whether this trend continues.

In Hanley we spoke to a fella from Romania who told us, "Jeremy Corbyn's manifesto is good but it's not going far enough". He read out aloud from our Socialist Party leaflet, "A socialist government to take into public ownership the top 150 companies that dominate the economy and run them under democratic worker's control and management - that's exactly what we need!". He then bought a copy of the Socialist and donated £5 to our fighting fund.

Sam said she had never voted before, but will do this time because of Corbyn's policies, and will keep in touch with us via social media.

Cael told us that he has become interested in politics because of Corbyn, and will be voting Labour. He also wants, "to learn more about politics". But he was shocked about us being forced out of the Labour Party in the 1980s and that the right wing still existed inside the Labour Party.

A fourteen-year-old lad came up to us asked us for more information, and took away many different leaflets. As he walked off he stuck his fist in the air and shouted "the workers united will never be defeated!"

We had a great conversation with a young Keele University student which included why the Russian revolution was a victory for the working class, why the German revolution in 1918 failed and various issues concerning the current general election. She agreed to do an introduction on the German Revolution at one of our branch meetings, paid £2 for the Socialist and said she wants to join the Socialist Party!

Change of mood in Newcastle

Despite the proximity of Christmas (lots of people had their heads down - determined to shop 'til they drop) we had a good response on our Socialist Party stall in Newcastle. There was a very strong anti-Tory mood.

Our call of 'Get the Tories out! Fight to save the NHS' was well received. People are worried that Boris will want to sell off what's left of the NHS.

The mood is definitely moving towards Corbyn. Even those who aren't too keen on him agreed it was his policies that would have them voting Labour. People are beginning to see his manifesto is pro-working class.

Socialist ideas are beginning to be discussed. People were telling us they were socialists.

One fella asked whether we thought Corbyn would stick to his policies. He agreed with our attitude that there were no guarantees, and there would have to be a battle to ensure Corbyn's policies weren't scuppered by the Blairites in the Labour Party.

I really enjoyed the stall. We had our hands shaken and people thanking us for getting out and fighting.

We sold 17 papers, raised around £20 in fighting fund and met a person interested in joining the Socialist Party.

We had our best campaign stall of the general election so far. And the best response I've ever experienced in Stratford, east London.

People who might normally walk past our stall, wanted to stop and talk. Their interest had been piqued by Jeremy Corbyn's anti-austerity policies. And they were angry about Tory NHS lies.

The Labour Party stall was opposite us. They were sympathetic to what we were doing. One of them bought a copy of the Socialist for £2 solidarity price.

But we heard Labour activists excusing Tony Blair's NHS cuts and privatisation and complaining about how many children Boris Johnson has! That won't win over working-class people sceptical of all politicians, particularly following the negative role of the Blairites in power.

16 people bought a copy of the Socialist. Another two wanted to get involved with the Socialist Party. And we raised £20 on our card machine, for those that don't carry cash.