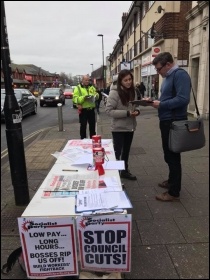 There seemed to be a new mood among the people who stopped at our stalls in Southampton over the past week.

Gone were the concerns over Brexit, the Labour leadership and whether the Labour manifesto was deliverable. This was replaced by outright anger at the Tories.

Repeatedly people said that the Tories would break their election promises and that the NHS was certainly not safe in Tory hands.

There was not a discernible increase in the numbers of people who stopped to talk to us, but those who did were very angry at the thought of five more years of Tory rule - which would inflict more suffering on the poorest in society.

There were calls to action. One person said: "We need a revolution!"

Another talked about the growing number of homeless people on the streets of Southampton. They said that the tourists who come here on cruise ships must think they are visiting a third world country. And it could only get worse under another Tory government.

Some very generous donations were made to our fighting fund and people wanted to buy the Socialist paper too.

58 people got a copy, we raised £73 fighting fund and five people left their details to join the Socialist Party.

The government has announced it will strip Northern Rail of its franchise and nationalise it.

We say that's good, but it needs to be run under the democratic control of elected representatives of rail workers and passengers.

Campaigning in Leeds on the same issue, we sold 12 copies of the Socialist, raised £14 for the fighting fund, and met three people who are interested in joining the Socialist Party. 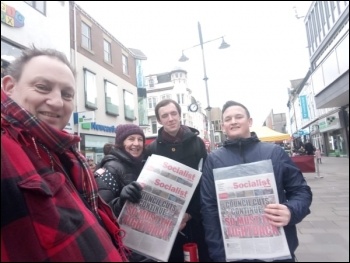 It was bitingly cold, so Newcastle was a bit desolate on 18 January.

But people liked our message 'stand firm against the Tories - fight low pay.' One woman commented how committed we are, being out on the street on a "day like this".

The people who stopped were interested in our take on developments in the Labour Party.

Two young people expressed an interest in joining the Socialist Party. Others took our number and are going to read our material and might get back to us.

Good response on our 25 January Socialist Party stall. Lots of anger against low pay, attacks on our NHS, and a recognition that we need to build a mass campaign against Boris Johnson and his rotten Tory government. 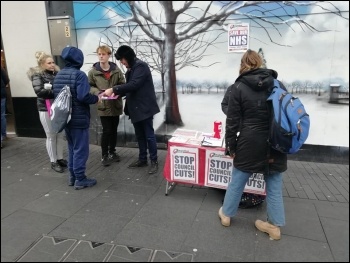 It was a busy day of campaigning for Leicester Socialist Party on 21 January.

We started with a Socialist Students stall on De Montfort uni campus, our bus station Socialist paper sale was from 5pm until 6pm, then our Socialist Party branch meeting, where we discussed the huge strikes and protests in India. And getting organised for the week ahead.

Another good campaign stall on 25 January. Councils do have the option to fight the cuts, but they clearly need a little encouragement!

Trade unions need to lead the way forward for their members, organising to pressure councils to save jobs and services by fighting for a needs-based, no-cuts budget.

The fight continues to stop council cuts and defend jobs and services in Brighton. Lots of angry people, still not happy, looking to get active. Acorn housing campaigners were out too, fighting evictions.

People were glad to see us campaigning on the streets. They bought our Socialist paper and donated £50 to aid the fight against the Tories.