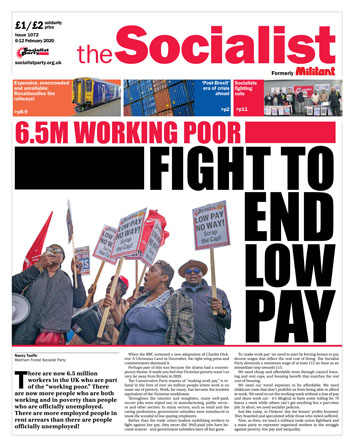 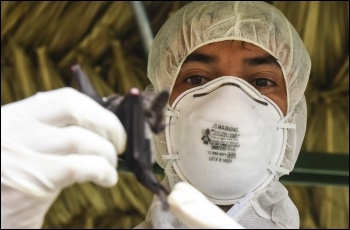 Tragedies like the deaths from novel coronavirus, over 400 at the time of writing, are never just 'natural disasters'. They are not isolated from society. They are impacted by capitalism and also have an effect on the system itself.

By the beginning of February there were over 14,000 people confirmed as infected. The overwhelming majority are in China, but there were cases in over 20 countries.

While only a small percentage of people die from it, there is currently no vaccine or treatment. Because people are infectious before the symptoms appear, the real number of cases is probably far higher, and the death toll will undoubtedly rise.

The United Nations' public health agency, the World Health Organisation (WHO), has declared a global emergency. Its director-general is concerned about coronavirus spreading to poorer countries with weak health systems where the dangers would be higher. World capitalism and imperialism massively increase this risk.

Only two cases so far have been confirmed in the UK. The chief medical officer for England reassuringly said the NHS was "extremely well-prepared for managing infections." Clearly at this stage there is no need to panic.

However, before the new virus appeared, this winter's crisis led to the NHS Confederation, which links up trusts and organisations across the health service, saying the NHS was "on its knees." Underfunding, insufficient capacity and understaffing mean there would be questions asked of the ability of the NHS to cope with a big influx of patients resulting from new infections.

Strains on health systems around the world are reflected in the planned five-day strike of thousands of Hong Kong medical staff. They are demanding closure of the border with mainland China because the under-resourced and understaffed health services in Hong Kong cannot cope.

The Chinese state has responded much faster than in the 2003 Sars outbreak. But problems are still compounded by censorship and bureaucracy having made it more difficult to sound the alarm and coordinate responses.

There is an outpouring of anger on Chinese social media - usually dominated by censors - against the rosy image painted in official reports. Medical personnel say that in reality they are exhausted and ill-equipped. One photo even seems to show government officials wearing specialised respirator masks while doctors only have normal surgical masks.

This is the third outbreak of coronaviruses since the beginning of the century. One professor involved in research into a Sars vaccine said: "What's so tragic is that once Sars was gone, the investor enthusiasm for a Sars vaccine was zero. If the global health community had followed through and produced and stockpiled a vaccine, something might be ready to go now."

A publicly owned pharmaceutical industry - under democratic workers' control and management - is needed now to maximise the response. International socialist cooperation is also vital to break these blockages.

The coronavirus outbreak has overlapped with the frictions in the world economy, especially world trade tensions. While the WHO said that unilateral travel restrictions aimed at China by other countries were counterproductive, a number of countries, led by the US, have done just that.

If in some countries people are forced to travel illegally, it increases the risk of cases not being spotted. This happened during the Ebola outbreak which peaked a few years ago.

Economists are predicting that the impact on the world economy will be much greater than the £22 billion estimated cost of the Sars epidemic. Thousands of factories have temporarily closed, and tens of millions of people are quarantined in their own areas in China.

Even leaving aside the impact on global tourism, the measures taken inside China will have the effect of slowing its economy even further, after years of declining growth and the recent blows of the trade war with the US.

The regime has flooded Chinese money markets with over £130 billion of new cash to counteract tumbling stock market prices. This follows years of similar injections.

A leading economist at consultancy firm Capital Economics pointed out that consequently "valuations of some financial assets are stretched." So "the new virus is a plausible catalyst for a market correction" - a crash. With or without a "market correction," Chinese capitalism's slowdown will have a knock-on effect on the world economy, already in a precarious state.

Capitalism cannot be relied on to safely deal with these kinds of emergencies. We need an international working-class movement to replace it with socialism.