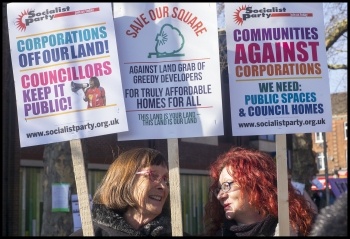 Labour council try to stop us meeting in our own area

The Socialist Party is fighting for a plan in the interest of the working class in Waltham Forest - not the profiteer developers, housebuilders and landlords.

We attended a meeting of over 100 people organised by community campaigners and residents in one of the most deprived parts of the borough.

These communities recognise their interests are not the guiding force for the council when it comes to its plan - aka gentrification.

Unfortunately, the meeting was taken over by the council, namely Councillor Simon Miller. There was security on the door.

Instead of a call being put out and everyone who had concerns or interest being able to turn up, you had to go online and register for a ticket in order to have a say in your own area.

People recognised this was undemocratic and took matters into their own hands. Some stood outside offering tickets they'd booked precisely to make sure no one who turned up was turned away.

Instead of the council and the campaign both presenting their positions, and the meeting being allowed to discuss, debate and come to a conclusion, we were broken down into workshops.

Officials from the council sat at each table solemnly writing down what residents raised, but with no commitment to do anything.

Issues ranged from air quality, to sewage, to lack of doctors surgeries, and places for young people.

Do we get a vote?

Socialist Party member Nancy Taaffe, chair of Save Our Square, asked that the meeting be allowed to vote on whether they accept the council plan or not. Why else come to a meeting if you can't have any impact?

She had to fight to do this. Councillor Miller was waving his finger in her face in an attempt to intimidate a campaigner who challenged the council - which did not work on Nancy.

Unfortunately, the local campaign organisers failed to recognise that not voting was a missed opportunity, shifting the balance away from their campaign. They postponed the opportunity to register opposition to a future unknown date.

This Labour council is not concerned with genuine consultation - Save Our Square supporters have learned that only organised resistance can stop them.

We asked what mechanism existed for the community to change, and if necessary reject, this plan. The council would not answer.

They said the Tories and London mayor Sadiq Khan required every council to have a plan. Our question - why don't you do what residents want not what the Tories and the anti-Corbyn mayor want?

The Socialist Party approach was shared by the working-class people in the room. We most certainly do want a plan for these areas that have been neglected for decades. But not this plan.

The trade union council is bringing all the borough campaigns together. Some in the room acknowledged they had voted for Nancy as a socialist candidate in previous council elections, and we were able to start a conversation about the need for working-class fighters to challenge the council at the ballot box as well as through campaigns.